Showing posts from August, 2012
Show all

- August 31, 2012
Today’s Times of India [31 Aug] reports that according to a survey conducted in 28 cities of India by a Hindi news channel Narendra Modi is the favourite choice as the country’s next Prime Minister.   We all know that surveys, like most other statistics, emulate the bikini by concealing more than what they reveal.   Nevertheless, I was left wondering why the people wanted Modi, of all people, as the PM.   I refuse to believe that these people are against the minorities in the country whom Mr Modi can eliminate by hiring some Ms Kodnani or Mr Bajrangi who will in turn hire the goons and potential criminals of the society to do the job.   I hope that these people who wish to see Mr Modi in the PM’s chair are laying their eggs in the much-vaunted development basket. Development became the catch phrase in Gujarat after the pogrom against the Muslims there orchestrated by Mr Modi in 2002 and for which he is paying a heavy price these days.   But did Mr Modi bring any real developm
8 comments
Read more

A Room with a View 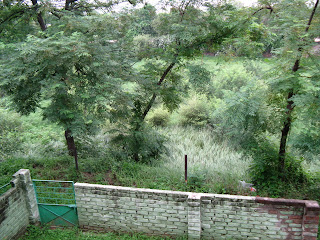 This is a picture taken from one of the rear windows of my residence.  The recent showers in Delhi have given a fillip to the weeds, shrubs and trees so much so that the place which normally looks like a semi-desert has begun to look like a quasi-jungle.  And I love it just for that.  Isn't it a blessing to live in such proximity to nature? We are also blessed with a fair share of animals and birds. The campus can boast of a wide variety of birds which keep singing, cooing and whistling. Peacocks and their hens used to be regular visitors.  In the last couple of years, however, monkeys have all but displaced most of the animals.  They go around stealing pigeons' eggs and even capturing a 'sitting' pigeon. They can sit majestically like kings on the dishes of our TV connections.  They may sometimes bite into the cables and throw us off our simple 'channel' delights.  They seem to have driven out the peacocks and their hens altogether.  After all, they a
12 comments
Read more

- August 25, 2012
Very few Popes of the Catholic Church were saints.   Far from being saints, many of them were remarkably depraved compared to the common layperson whom their religion promised to redeem from sinfulness.   It is not easy to combine worldly power and spiritual sanctity.   Authentic spirituality is a highly personal affair though it can and does wield much power over other people.   The power that Mahatma Gandhi wielded over many of his followers was spiritual to a great extent.   The Buddha and Jesus also wielded spiritual powers.   Unlike them, Gandhi did not become a god because of the time in which he lived.   Like Jesus, however, he was martyred by his own truth. The power that Jesus, Gandhi and others like them wield is quite different from the kind wielded by, say, Hitler or Osama bin Laden.   It is the power of the truth they believed in and put into practice in their life.    The power that Hitler and Osama possessed was political and hence worldly.   The power that most
3 comments
Read more

A moral tale from Pakistan

- August 22, 2012
Anita Joshua’s article in The Hindu , ‘ A growing intolerance’ (Aug 21, 2012), shows how Pakistan has become a nation of haters.   The Pakistanis hate not only the Hindus (7 million Hindus live in that country – imagine the magnitude of the hatred!) and Christians (who are, according to the article, changing their names to “Shahbaz, Shazia, Nasreen, Tahira, and such like”), but also the Muslims of denominations other than Sunni.   Shias, says Joshua, “are pulled out of buses and summarily executed in broad daylight in various parts of the country.”   Sufi shrines are bombed. “Hatred is the coward’s revenge for being intimidated,” says Undershaft, a Shavian character ( Major Barbara ).   How can there be so many cowards in a country who feel so intimidated as to hate such large numbers of people? Joshua’s article quotes Harris Gazdar of the Karachi-based Collective for Social Science Research: “Some of these crimes might be committed by groups with religious motivation, but mos
Post a Comment
Read more

Where has the music gone?

- August 18, 2012
Many psychologists have argued that the purpose of life is self-actualisation .   In simple words, self-actualisation means becoming a more fully developed, a more complete individual.   It’s an increasing unfolding of one’s potentialities.     It’s personal growth by fulfilling one’s needs. Kurt Goldstein, professor of neurology and psychiatry, defines need as a deficit state that motivates a person to replenish the deficit.   Need is like a hole to be filled in, a hole in the psyche.   Psychologists like Abraham Maslow made a hierarchy of human needs .   At the basic level are the physiological needs.   Food, sex, and other needs of the body are very fundamental needs.   The need for security, stability, freedom from fear, need for structure, etc comes at the next level.   Maslow placed “affectionate relations with people in general” in addition to those with family and friends at the third level.   Esteem needs come next; self-esteem as well as esteem from others.   At this
6 comments
Read more

- August 14, 2012
On this Independence Day of my country, I’m glad to have Baba Ramdev’s entertainment as a prelude.   Most newspapers today, including my Malayalam one, carried photographs of the Baba sticking his neck out of a bus in which he was carried after his arrest.   I must say he has come a long way from the time he tried to escape arrest in the garb of a woman last year: he has the courage to accept arrest now, though he may lack the confidence to carry out his promised indefinite fast. I love India because of people like Ramdev.   They provide entertainment.   When my wife wants to watch some serial like Na Kaha Aap ne Kutch, Na Kahi Mein ne Kutch (or something like that) on the TV, I urge her to switch to some news channel which will provide better entertainment.   What better entertainment can there be than people like Ramdev and Hazare?   When our politicians turned big bores or at best became the President of India, we are blessed with Hazare and Ramdev.   Advani has joined the
3 comments
Read more 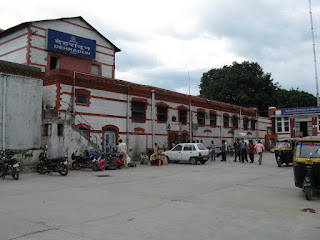 Dehradun Railway Station Age has not withered my willingness for learning new lessons in life. That was the real reason why I agreed to take two of my students for a debate competition to a school in Dehradun. It was my first trip to the place whose railway station reminds us of the colonial days. The British building does not seem to have undergone much change, except that a new wing was added later for reservation of tickets. When we landed there at 5.40 in the morning (very punctually by the timing printed on the ticket!), the railway station looked sleepy and deserted. I attributed it to the time – too early for a small town to wake up. I wondered, though, how the capital of a state in India could afford to be as sleepy as that when the sun had already started smiling gently. When we returned to the railway station at 3 in the afternoon, after our competition, the railway station did not look much busier. It was then I noticed the metre gauge train that was ticking on pla
32 comments
Read more
More posts