Showing posts from June, 2017
Show all

Not in my name 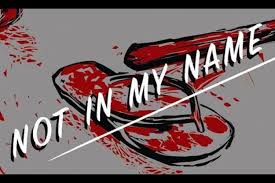 The various demonstrations that took the country by surprise yesterday show that India is not lost yet.   People gathered in thousands in various places to show their protest against the attacks on people belonging to a particular religious community.   From the time Mr Modi came to power in Delhi, certain criminal groups emerged under the banner of right wing religious activism and attacked certain sections of people.   Unfortunately the Prime Minister never condemned any of those attacks.   It appeared that the attacks had his tacit blessings.   It also came to light that the BJP and its allies are spending huge sums of money on spreading malicious information on social networks.   Those states ruled by BJP are changing the history textbooks in order to present the new generation with distorted histories.   In short, falsehood and hatred were being foisted on the nation very liberally.   It was an alarming situation. The latest protest in the form of #NotInMyName gives
4 comments
Read more

- June 28, 2017
The first time I read Richard Bach was in 1980. I read Jonathan Livingstone Seagull and it obviously led me on to Illusions . As a 20 year-old man who was terribly immature and even silly, I found the two books a great inspiration.   Both the idealistic Jonathan and the reluctant messiah of Illusions grew in my consciousness for many years.   Then I grew out of them.   The other day I was looking for a light read as I was recuperating from a viral fever which left me rather debilitated.   Illusions caught my attention.   It kept me riveted though I now don’t agree with quite many of the things in it which were gospel truths for me some three decades ago. The basic assumption of Illusions remains true even today.   It will remain true any day.   The world as seen by most people is an illusion.   We keep chasing shadows such as money and positions, luxury and redundancy.   We seek to fill the ineluctable vacuum with religion and god(s).   It’s only a few rare beings, highly
6 comments
Read more

Land of monks and peace 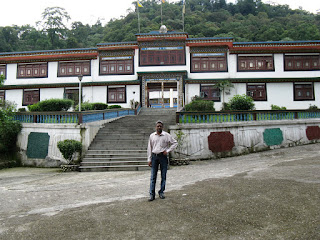 Lingdum Monastery Of all the places I’ve visited, it’s Gangtok that keeps beckoning me again and again.   My wife and I spent three days there in 2010.   I don’t know if the place is quite the same today.   Back then, it had a pristine beauty.   The streets were narrow and congested but without any filth anywhere.   It was a clean hill station.   Quite a few monasteries lay around the town itself.   There are other monasteries elsewhere in the state.   In spite of all the hundreds of visitors walking around at any given time, the monasteries look spick and span.   It was the monasteries that really drew me to Gangtok in the first place.   When I mentioned my travel plan to a student from Silchar, he asked me why I wanted to visit Gangtok.   “Nothing to see, Sir,” he said.   “Monasteries,” I grinned.   Bakthang Falls Along with my wife I visited every single monastery in and around the town.   There’s something repetitive about the monasteries.   They look simila
12 comments
Read more
More posts