Showing posts from June, 2015
Show all

The Clown on the Trapeze

- June 20, 2015
Each faltering step, each fall of mine, Makes you burst out into laughter: Because I am the clown in the pack Because the motley is my birthmark. Each swing of leotards on trapezes Sighs in comic relief in the tail of my coat: Because the show must go on Because the Master is watching it. Watching it is His way Of creating and preserving; Watching it is your way Of playing for a while The game within the game; On a spiralling ladder Of intertwining Venn diagrams; With no place determinate For the clown in motley: Because the show must go on Note : I wrote this poem almost two decades ago.  Both the show and the clown have changed quite a bit, and they go on entertaining those concerned in their own ways.
14 comments
Read more

- June 17, 2015
The seats meant for the economically weaker sections in some Delhi schools are being sold at prices ranging from Rs 3 lakh to Rs 10 lakh, according to reports . Reputed schools including those run by religious organisations figure in the list of the culprits.  It is not clear whether the school managements are directly involved in the crime though it is impossible to believe that such rackets function in schools without the knowledge of the managements.  When today’s Times of India came with many headlines about the above racket, I had just completed reading a short story titled ‘Pilla the Thief’ in Roji Abraham’s collection, Kaleidoscopic Lives .  The story is about Shivan Pilla, a very efficient thief, who later gets converted due to the affection shown by an elderly woman.  Pilla becomes a religious preacher after his conversion.  The people who called him a thief earlier now call him “Pastor”.  His reputation changed after he presented a ‘testimony’ at a religious conventi
7 comments
Read more

The Path of the Masters 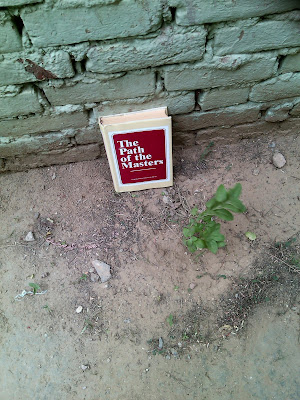 The following passage is extracted from the book, The Path of the Masters, by Julian Johnson who was a disciple of Sawan Singh, one of the Radha Soami Masters.  Johnson was a doctor by profession.  He was also a Christian pastor.  He came to India with the intention of converting Indians to Christianity but ended up converting himself into a Satsangi.  He wrote five books about his Master and the Satsang.  He died under mysterious circumstances in 1939. The extract : I can almost hear some Western critics say: “Why don’t Masters take measures to prevent the downward drift of mankind?”  The answer is that the Masters do not interfere with the natural order.  It has been on the program from the beginning of time.  These ages must come, as they are ordained by the Creator.  It is no part of the duty of the Masters to interfere in world processes.  Their duty is to help individuals to escape this melee of troubles.  And one thing we should always keep in mind – the Supreme
16 comments
Read more

- June 07, 2015
Fiction “What are you thinking of so deeply?”  Anita asked her husband as they were walking up the narrow street leading to the school where they were going for a walk-in interview for teaching jobs.  The bus that took them from the suburban rail station had dropped them at the foot of the hillock that was majestically crowned by the school building. “I was thinking of our destiny,” answered Sridhar.  “I’ve just a few years left for retirement.  You have a few more years.  And here we are hunting for a job.” “What is in your destiny, no one can take away.  What is not in your destiny, no one can give you.”  She laughed glumly.  She was repeating exactly what Sridhar had told her the other day when she grieved the death of the school where they both had been working for years.   Their school was founded by an industrialist.  He now wanted an amusement park in its place.  The city needs relaxation, he argued.  People who were not very kind to him said that the school fa
16 comments
Read more

- June 06, 2015
“Put him in the same cell as that Baba’s Chela,” said the Inspector of Police when Michael was brought to the Royal Incarceration.  “The Chela should know how to deal with witches and their lovers.” Michael had been accused of practising witchcraft because some charge was needed for relegating him or anyone to the Royal Incarceration according to one of the many Orders promulgated by the new King. “Baba wanted to own the Taj Mahal,” said the Chela having introduced himself to Michael.  “Baba Sena tried to carry out the wish.”  His devotion had landed him in the Royal Incarceration. “Why does Baba want so much land?” wondered Michael.  He had seen enormous tracts of land encompassed by tall walls with the Baba’s signboards declaring proprietorship in many places during his extensive journeys over the last few months. Chela looked at Michael as if the latter were an imbecile.  “He wants the whole country,” explained Chela.  “Ownership is the only real power and power
3 comments
Read more

- June 04, 2015
Michael whispered something into his folded palm and then made a throwing gesture at the village.  He was leaving the village along with his family as the land had been acquired for development.  In fact, an adventure park was going to be constructed on the land.  The security guards at the gate stopped him.  A huge wall was erected around the village with security guards at the gate after the land was acquired under the Land Acquisition Order promulgated hurriedly as soon as the new King was enthroned.  One of the many mottoes of the King was: ‘Decisions are in; delays are out.’  Michael being lazy, his family was one of the last to be out of the village.  “Why did you curse?” asked one of the guards. Michael looked at him in dismay.  “I didn’t curse.” “But you made the gesture of a curse.” “That’s not a curse.  It’s exorcism.”  Michael explained that devils had started entering his soul from the time the guards and their bosses had taken over his village.  He
Post a Comment
Read more

- June 01, 2015
On 25 Nov 1949, the day before the Constituent Assembly wound up its proceedings, Dr B R Ambedkar made a speech summing up the work of the Assembly and thanking all the people associated with it.  He ended his speech with three warnings. The second warning was about the dangers of unthinking submission to charismatic authority.  Quoting John Stuart Mill, Ambedkar cautioned Indians not “to lay their liberties at the feet of even a great man, or to trust him with powers which enable him to subvert their institutions.” “In India,” went on Ambedkar, “Bhakti or what may be called the path of devotion or hero-worship, plays a part in its politics unequalled in magnitude by the part it plays in the politics of any other country in the world.  Bhakti in religion may be the road to the salvation of a soul.  But in politics, Bhakti or hero-worship is a sure road to degradation and to eventual dictatorship.” Today the two major rival political parties in India are laying siege to
6 comments
Read more
More posts