Showing posts from January, 2014
Show all

What Women Want Most

One of the stories in Chaucer’s Canterbury Tales is about a young knight of King Arthur’s.  The knight could not control his lust when he came across a beautiful maiden.   Arthur’s Court was scandalised by the rape and the knight’s execution was ordered.  The Queen and her ladies, however, interceded and got the punishment commuted.  The knight is given a year’s time to find out what women want most in the world. The knight went from place to place finding out what women wanted most.  He got different answers from different women.  “Wealth and treasure,” said some.  Honour, jollity, pleasure, gorgeous clothes, fun in bed... thus went the women’s options.  Some even wanted to be “oft widowed and remarried.”  Seeing that women could never agree on one thing, the knight rode back with the odour of death in his nostrils.  On his way back, he came across an old hag.  Chaucer’s narrator, Wife of Bath, reminds us that those were the days of fairies and elves, days before relig
18 comments
Read more

Mystery of the Unknown

Crises are an integral part of human life.  Doubts, anxiety and even despair seize us mercilessly sometimes.   They can be excellent opportunities for personal growth, provided we deal with them effectively. Personal growth calls for some change.  It may be a change of attitudes, environment, job or something else.  Most of us don’t like change.  Change frightens us with the uncertainty that inevitably accompanies it.  Psychotherapist Sheldon B. Kopp wrote 4 decades ago (in his book, ‘ If you meet the Buddha on the road, kill him! ’) that the neurotic who comes to a therapist doesn’t want to change himself.  “His goal is to become a more effective neurotic.”  He doesn’t want to give up his neurotic feelings and attitudes because he is scared of the changes that would ensue.  He would rather have his neuroticism and have the therapist make him feel more comfortable with it.  Change is  challenge to face the unknown.  The misery of the familiar is preferred to the myste
6 comments
Read more

- January 23, 2014
Games are interesting only when you get into the play field and get hurt. Hurts are like orgasm: pleasure and pain simultaneously. You can be an observer too.  But you will have no orgasm.
10 comments
Read more

- January 18, 2014
Fiction Manohar didn’t go home after he left his office.  Instead he walked up the mountain where Baba lived.  Baba was said to have the powers to see one’s future and give appropriate counsel. Yesterday Sunanda Pushkar proclaimed her love for her husband and today she is found dead in her bed.  Aam Aadmi Party’s law minister took the law into his hands and ordered the police to do something illegal, out of the natural earnestness of the new broom to sweep clean rather than malice.  Life is more complex than death. But these were not the problems that really nagged Manohar.  His office was in turmoil.  People were just disappearing from the office day by day just like they disappeared during Stalin’s rule in Russia.  More than half of his colleagues had disappeared without a trace.  If Sunanda Pushkar can die laughing and without a warning, people can disappear equally mysteriously.  Yet… yet, something seemed uncanny to Manohar.   He needed Baba’s counsel and solace.
8 comments
Read more

- January 14, 2014
The institution was going to collapse.  Everybody blamed everybody else for the situation.  The leader is not good, said some.  The staff were playing politics all the time, said some others.  The infrastructure is outdated, said yet others.  Everyone has a reason for blaming others, to paraphrase the advertisement slogan of an agarbati . Let us do something radical about it, said someone.  The action may make some drastic demands. “Let me ask my husband/wife,” said some. “I’d love to join you, but you know…” said some others. “I’m in the South Pole now, but I’ll definitely join you as soon as I reach our place,” said yet others. You deserve the leader who was foisted on you by your destiny.
10 comments
Read more 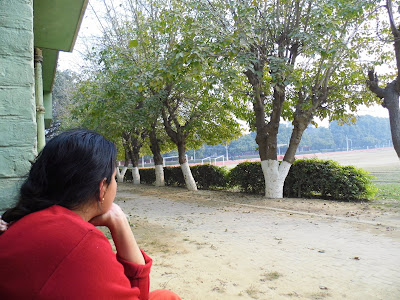 "What does the future hold for us?" she asked. "Look up," I said.
10 comments
Read more

- January 13, 2014
A manager, who had just returned from a Motivation Seminar, called an employee into his office and said, “Hence forth you are going to be allowed to plan and control your job.  That will raise productivity considerably, I am sure.” “Will I be paid more?” asked the worker. “No, no.  Money is not a motivator and you will get no satisfaction from a salary raise.  Happiness comes from within, you know.” “Well, if I do my job better and production does increase, will I be paid more?” “Look,” said the manager.  “You obviously do not understand the motivation theory.  Take this book home and read it; it explains what it is that really motivates you.” As the man was leaving, he turned and asked, “If I read this book will I be paid more?” The above story is taken from Anthony de Mello’s book of parables, The Prayer of the Frog . The moral given by the author is: “Truth does not lie in theories.” A meeting which I attended today motivated me to bring this
10 comments
Read more

- January 10, 2014
“Why did these bastards bring you to me” asked Pontius Pilate. “Because Herod wants to fuck his brother’s wife,” said Jesus. “You are questioning the authority,;  Herod is my man though he is a Jew,” said Pilate. “The only authority is the one that comes from the author, the conscience,” said Jesus. “Conscience!” exclaimed Pilate.  “I can buy it from Caesar.   And the price is as cheap as that dirty beard of yours.” “What’s your problem?” asked Jesus.  “Is it my beard or is it my truth?” “What is truth?” asked Pilate. Jesus said, “Condemn me to the cross.”
16 comments
Read more This little beetle (or whatever creature it is) sitting on a yam ( chembu , in Malayalam) leaf looked helpless.  As I closed in on it with my camera, it seemed to want to run away but couldn't.  I couldn't help imagining myself in its place. Red ants don't like to be disturbed.  They attack you with all their life if you disturb them.  But I didn't disturb them...  I hope you can see them sitting on the coco shell.  They were building a sweet little nest on the seed without realising that the farmer would soon come and pluck away the coco. Chembu and coco have value in the market.  Beetles and ants are like me and most people: little creatures at the mercy of the big ones.
14 comments
Read more 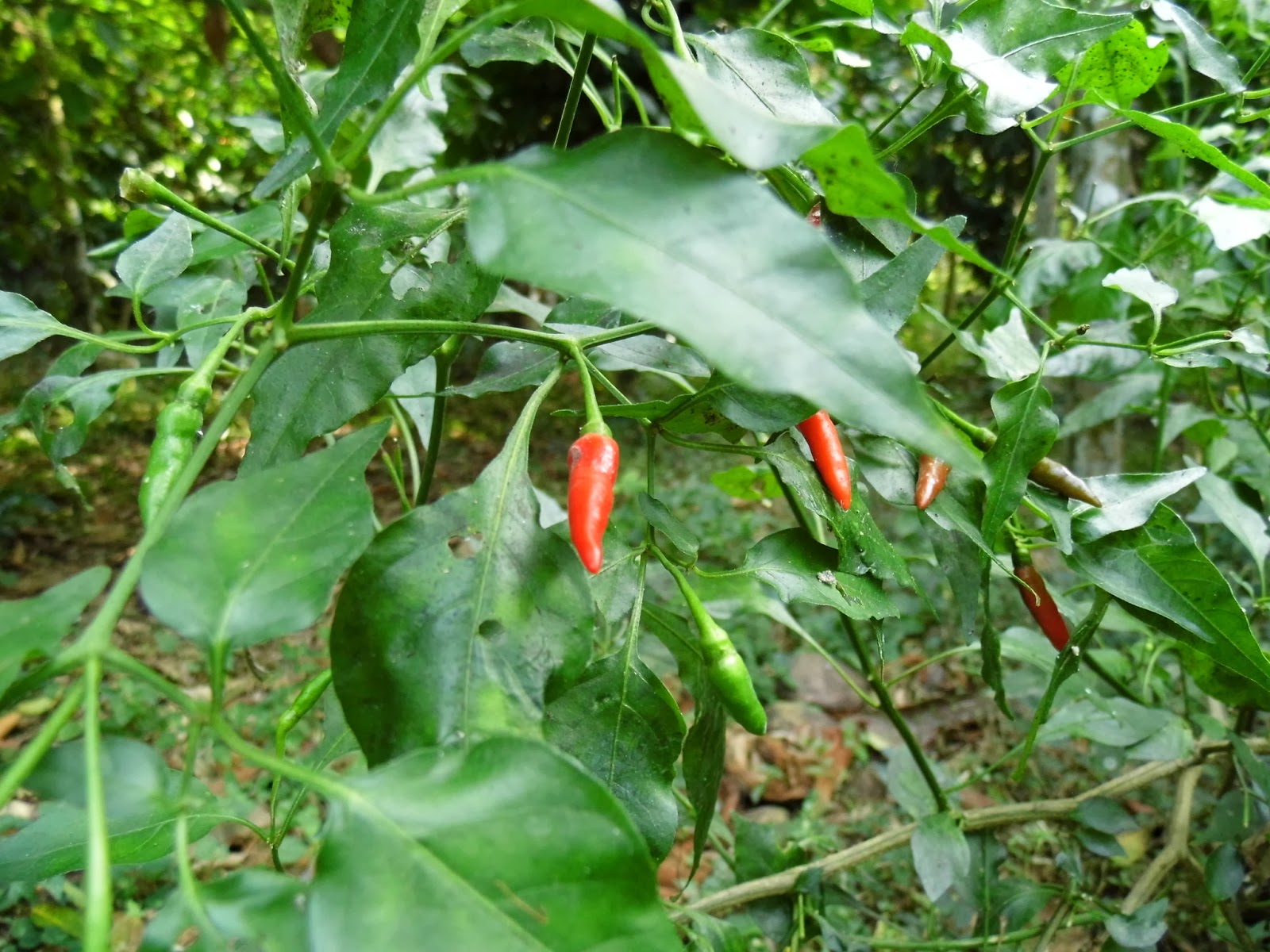 Kerala usually gives me fantastic pictures.  This time, however, my visit was too brief - just two days - to go shooting pictures.  These chillies fascinated me. They grew in a place where one wouldn't expect them.  But that's Kerala: it throws the unexpected on your face.
23 comments
Read more 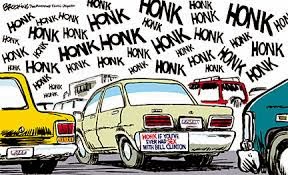 The traffic crawled at snail’s pace.  Maybe, some politician or baba or such VIP was passing and there were security barricades somewhere… VIP security inevitably means insecurity for the aam aadmi .   One man’s security is another man’s insecurity, in the words of antediluvian wisdom. Poet was on his old scooter whose expiry date had elapsed long ago.  He became weary of the honking from behind; he felt insecure, in other words.  So he pulled his scooter to the brambles on the side of the road and waved his hand to the honking driver to indicate ‘Go ahead.’  The car of the honker overtook Poet’s scooter. “Don’t Honk.”  Poet could read the poster with big letters stuck on the rear of the car.  “Kute bhi nahin...”  The poster went on to admonish: “Even dogs do not bark without a reason.”
29 comments
Read more

I'm not a Maoist

- January 03, 2014
I loved the following video, a link to which was posted as a comment to my last blog.  I felt the urge to bring it forward from the comment box to the mainland.  So I'm posting it here. Gaaon Chhodab Nahin Do watch it, if you can spare 5 minutes.
Post a Comment
Read more

How much land does a man need?

How much land does a man need?  is a short story by the classical Russian writer, Leo Tolstoy.  The story highlights human greed. Pahom, the protagonist, is a peasant.  He thinks that more land means more happiness for a peasant.  But how much land does a peasant need?  Making the question more general, how much wealth does a person need? This is the question that Tolstoy answers in his story.  Using all his savings as well as selling his colt and a sizeable share of his bees, hiring out his son, taking advance wages and borrowing from his brother-in-law, Pahom collects enough money to buy more land thinking he would be happier.  In fact, he became contented with all the vast acres he possessed.  But human nature is seldom contented.  It always wants what it does not have.  [Leave out exceptions like saints (extinct species) and lunatics.]  Pahom learns about a place where a Commune gives 25 acres of land free to every individual and more if he/she wanted to buy.  He
25 comments
Read more

One of the phone calls that greeted me this New Year’s Day drove me to some serious contemplation.  The friend quoted the example of Galileo who retracted his scientific theory before the religious Inquisitors and later explained his action: “Science doesn’t need martyrs.” My meditation led me to the notion of freedom provided by the 17 th century philosopher, Spinoza.  He argued that we were not totally free.  We are controlled by certain inescapable laws of nature as well as our genetic makeup.  Evil is also an essential part of nature.  “The evil which ensues from evil deeds is not therefore less to be feared because it comes of necessity;” said Spinoza, “whether our actions are free or not, our motives still are hope and fear.” Hope for a better future; fear about the present situation.  The martyr is not afraid for himself; his fear is about the future of the society.  Martyrdom need not be a virtue. To be really great is not to be placed above humanity, ruling
17 comments
Read more
More posts