Showing posts from June, 2013
Show all

- June 29, 2013
It was Mr Viswas’s belief that a man without a religion was like a bird without wings, though he relied on Kingfisher Airlines whenever he really wanted to fly.   Business took him to many places.   But he knew too well that the ultimate place would remain beyond his reach without religion.   Where was the time, however, for praying?   Independence Day, Republic Day and Gandhi Jayanti were the only holidays he had during a whole year.   All the other days kept him engaged from the early morning alarm to the midnight chime of his bedside clock.   Thus it was that the idea flashed in his brilliant mind: ‘why not have robot do all the praying for me?’ A praying robot was instantly arranged.   Viswas called the robot Monk.   Monk knew all kinds of prayers.   Viswas programmed Monk to recite appropriate prayers to appropriate gods at appropriate hours of the day.   Monk also knew a lot of theology and a bit of philosophy and other things.   One Independence Day Viswas, feelin
18 comments
Read more

- June 28, 2013
“Sleep tight, you morons,” muttered Arjun as he stepped out of his dorm with a bag slung over his back.   The security guard had rung two bells a few minutes back indicating that it was two o’clock in the night.   The guard must have gone to sleep after performing his duty perfunctorily.   This was the best time to run away. The annual exams were round the corner and Arjun was fully confident that he would fail in spite of all the efforts made by both his teachers and the Board of Education to make him pass by giving him free marks in the name of co-curricular and extra-curricular activities.   He wouldn’t score even ten percent in the written exams. Sreesanth, his hero, was in jail.   Who does not make use of a chance to earn a few lakh rupees more, wondered Arjun.   His father was making lakhs every day.   Arjun’s father, Nakul Kulapati, was a an MLA of the ruling party.   People came to him offering big packets or briefcases full of money.   Nakul Kulapati gratified
20 comments
Read more 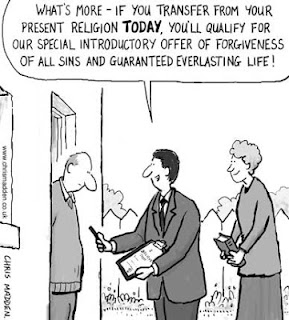 In a relatively old Malayalam movie, Kizhakkan Pathrose , the protagonist is a criminal.  One day he goes to a Catholic priest who is involved in many charitable works and says, “I have committed a lot of crimes and caused much pain to many people.  I want to atone for it all by making a donation for noble causes.”  The priest accepts the cheque without saying a word. “This is not atonement,” I blurted out while watching the movie a few minutes back on a TV channel. “Why not?” asked Maggie, my wife, the only other person present in the room. Courtesy: Internet “Real atonement is only when the person gives up his criminal ways.  The rest is commerce.  This fellow is trying to buy atonement with money and the priest is his accomplice.” Maggie was about to say something but suppressed it.  I did not succeed in making her speak.  I think she wanted to say that I was a silly idealist. “Put God to work for you and maximise your potential in our divinely ordered ca
26 comments
Read more

End of a Holiday 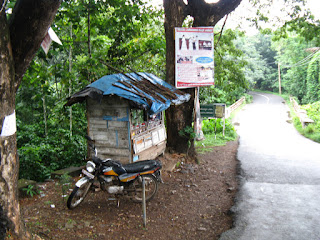 I’m not fond of long vacations.   Work keeps me engaged and happy.   This is the first time I took a long holiday (one full month) in Kerala.   I needed it. One of the first persons I met after returning to Delhi (whose afternoon sun reeked of malice and vengeance in stark contrast with the monsoon that drummed a relentless yet enchanting rhythm on the roof of my brother’s car as he drove us to the Cochin airport) was the boss of a commercial conglomerate in the national capital.   I met him this morning, two days after I reached Delhi.   Why didn’t I meet anyone in these two days?   People seem to be hiding themselves somewhere on the campus.   Did I smell fear on the campus?   Not even the children played in the courtyard of the staff quarters as they used to do till late into the night in summer.   Why weren’t my colleagues coming out of their homes on their usual evening walks, I wondered. Even those who dared to come out did not seem to dare to start any communicati
16 comments
Read more 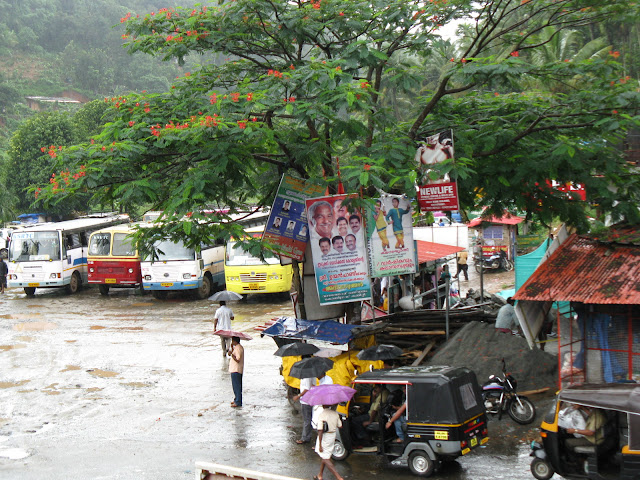 Cheruthoni is a small town in the hill district of Idukki in Kerala.  I passed through the town the other day.  Sitting on the first floor of a small restaurant facing the bus stand, I clicked this photo.   It's a small bus stand. The rain hummed a soothing music. No crowds, no hustle and bustle. Quite a different kind of bus stand, I thought. Dominated by a gulmohar whose flowers had not vanished yet in the heavy monsoon rains of Kerala. This is my last post from Kerala.  I will be in Delhi in the evening where a different kind of music is on...
12 comments
Read more 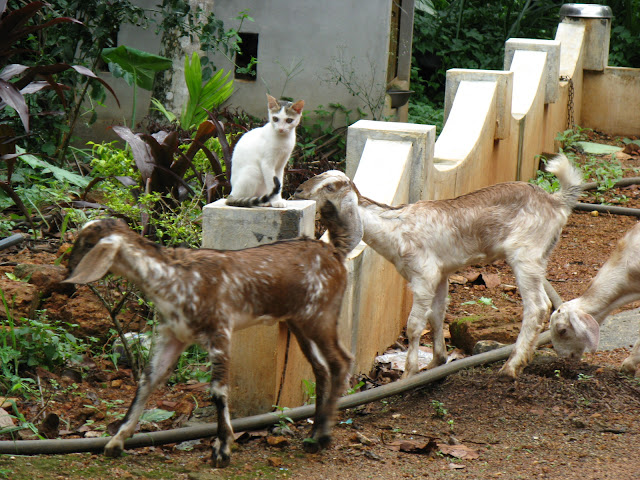 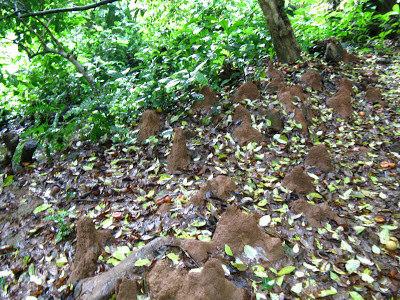 Somerset Maugham narrates an anecdote in the Foreword to his majestic novel, Of Human Bondage .   Celebrated French novelist, Marcel Proust, wanted a periodical to publish an article on one of his great novels.   The novelist wrote the article himself thinking that none would be a better critic of his than himself. Then he asked a young friend of his, a man of letters, to put his name to it and take it to the editor.   The editor called the young writer after a few days.   “I must refuse your article,” said the editor.   “Marcel Proust would never forgive me if I printed a criticism of his work that was so perfunctory and so unsympathetic.” Authors are touchy about their productions, says Maugham, and inclined to resent unfavourable criticism.   But they are seldom self-satisfied.   “Their aim is perfection and they are wretchedly aware that they have not attained it.”   Not only authors, but any person or institution should be ready to accept criticism from others as well a
14 comments
Read more

- June 14, 2013
Re-reading Colleen McCullough’s novel, The Thorn Birds , after a gap of about 25 years was as much a delightful experience as the first reading.   The novel that runs into almost 600 pages tells the story of three generations of the Cleary family.   Paddy and his wife Fee lived in New Zealand along with their 6 children (and more would be born eventually) and managed to eke out a living until invited by Paddy’s sister to Australia.   Paddy was to inherit the fabulous wealth (13 million pounds) of his aging sister after her death. Mary Carson, however, changes her will when she sees the relationship that unfolds between her young parish priest, Fr Ralph, and the little Cleary girl, Meggie.   Meggie is a charming young girl.   Mary knows that she will grow up to be one of the prettiest women in the parish.   Jealousy, more than malice, motivates Mary to write a new will according to which her entire property will go the Catholic Church and Fr Ralph will be its manager.   Mary
13 comments
Read more 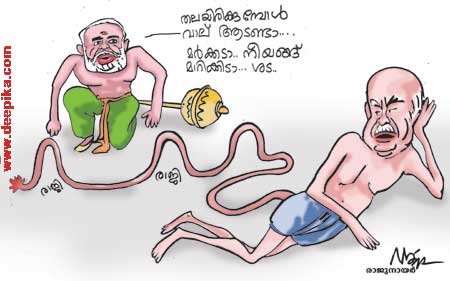 Cartoon from Deepika This morning's Malayalam newspaper, Deepika, delighted readers with the above cartoon on the front page. Modi is portrayed as Bhima in quest of the Sougandhika flower.  He encounters Hanuman on the way and is unable to meet the challenge posed by Hanuman.  Finally Bhima will understand the real power of his interceptor and seek his blessings. Fabulous cartoon, I mused.  It depicts the present situation tersely.  And there's a deep irony too in it. Neither Modi nor Advani is worthy of any comparison with the epic characters.  Both have acted from selfish motives thus far and continue to do so. But the nature of the Kurukshetra has changed too today.  Today our heroes are no better than these characters.
25 comments
Read more 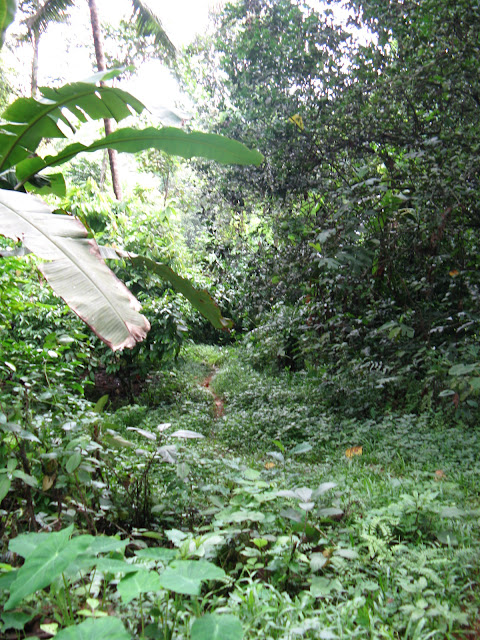 The way to heaven is narrow...
21 comments
Read more 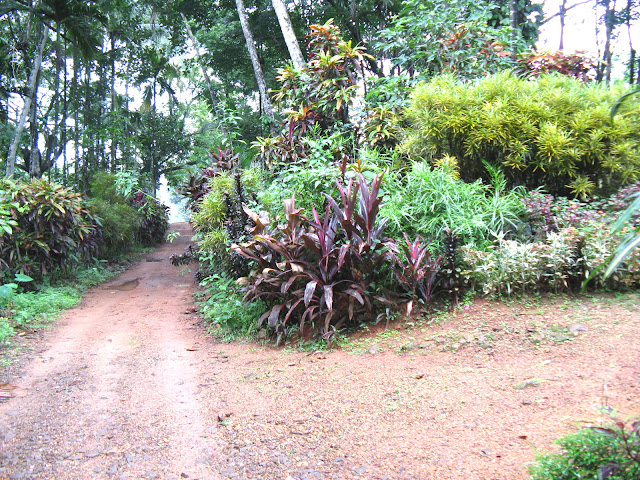 - June 05, 2013
Tuskegee was a little town in Alabama, USA, when Booker T Washington was invited to establish there a school for the coloured people of the state in the year 1881, 16 years after the Emancipation of the Negroes.   The Tuskegee Institute became famous for the holistic education it provided to the coloured students.   Washington did not provide mere bookish learning; he taught the students one trade or another so that they could earn their living as soon as they left the school.   Mere earning of livelihood was not Washington’s objective, however.   Education is “any kind of training... that gives strength and culture to the mind ,” says Washington in his autobiography, Up from Slavery (prescribed as an optional supplementary reader by CBSE for class XII). Washington’s book is a heart-touching expression of a profound philosophy which seeks to discover the good in every individual and cultivate it irrespective of race or religion.   There is a passage in the book which eloque
12 comments
Read more

The Paradox of GDP

- June 04, 2013
Dr Manmohan Singh, our Prime Minister, reminded recently of the country’s economic security.   On the basis of GDP, India ranks at the 10 th place in the world.   However, when it comes to per capita income the country’s rank is a pathetic 141.   We are a rich country with poor people, in other words. GDP is the sum of all the products and services of a country.   If we calculate the sum of the entire amounts spent by the government and the private sector including individuals as well as the savings and earnings from exports and then subtract the sum spent in imports, we will get the country’s GDP for the concerned year. Interestingly, the GDP will grow when prices rise.   When you spend more money on petrol or shopping or medicine, you are raising the GDP of your country.   If you wash your own clothes instead of paying a launderer for that, or polish your shoes instead of paying a shoeshine boy, or cook your own food instead of eating at a restaurant or some such plac
15 comments
Read more

Superheroes and their various schools

- June 03, 2013
Reading Deepak Chopra’s latest book, The 7 Spiritual Laws of Superheroes , is like experiencing a dream.   Chopra has a peculiar fascination with the number 7 just like Ayurveda has a fascination with odd numbers.   The number is quite irrelevant, I think.   The message is quite simple though profound: live with a clear idea of what you want from life and you will be a superhero. “It’s not the moments of tragedy that define our lives,” says Chopra quoting his son Gotham who is quoting Batman and who is also the co-author of the book under review, “so much as the choices we make to deal with them.”   The entire book, just like most other books of the kind, is about how we can equip ourselves properly so that we will make the right choices when faced with tragic situations.   That’s why reading it is like experiencing a dream: we know and love the ideal, but the bitter struggle between the ideal and the reality constantly wakes us up. This time Chopra has chosen to take exam
20 comments
Read more
More posts