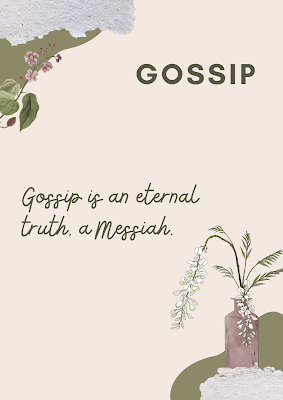 I’m halfway through K R Meera’s Malayalam novel, Ghathakan (Killer). The narrator-protagonist compares life to an onion with endless peels. “The onion’s politics is to toss acid to your eyes. Its ideology is the burning sensation in the eyes. Our tears are its message.” As I read the theme of the latest Indispire Edition, #gossip, the onion’s politics rushed to my mind. Gossip is more like an onion than life is. You can peel it endlessly. You can feel its acid in your heart. Its scalds carry intoxicating delights.

Quite a lot of the informal human communication – conversations, in simple words – is little more than gossip. Essentially there is nothing wrong in that. People love to talk about their colleagues at workplace, other relatives when they meet at family functions, or neighbours when they are in the home-premises. That’s quite natural, I guess. Life is after all a series of tightrope walks between you and another human being associated with you. It’s only natural that we check the quality of each rope every now and then.

I like to listen to gossips. They are sources of infinite grassroots wisdom. If there were no gossips, I would have imagined life as a sublime process engaged in by noble people who leave behind adorable footprints on the sands of time. I would be the only exception, a scarecrow-like figure, standing on the edge of the infinite sands feeling so unworthy to step on to the sands. Thanks to all the gossips, I understand that the other people too have their weaknesses.

As a young man, I used to think just the other way. I was puffed up with egotism. I used to think that I was some great personality, if not an avatar of god Vishnu or some other deity. Whenever I took the pen, I imagined colours dancing in the readers’ hearts. Rhetoric was my weapon. I mistook culture for sartorial elegance.

But the peels of the onion had to fall some day or the other. That’s a natural law. Onions shed their peels as naturally as trees shed dead leaves. Other people assist generously in the process too. That is where gossip becomes the eternal truth, the real Messiah, the perfect redeemer. Gossips bring truths home. Ugly truths. But they look so adorable when they are about other people. Either way, gossips are good. They entertain as well as inspire.