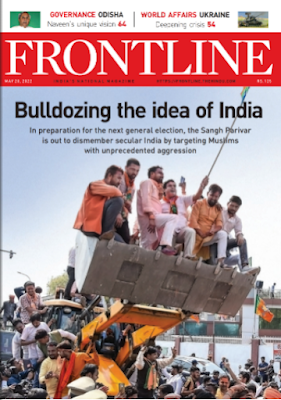 The latest issue of Frontline magazine focuses on the bulldozer politics that has taken India captive. More than half of the magazine is dedicated to the topic: Bulldozing the idea of India. R Vijaya Shankar sets the tone in the editorial by asserting that the problem in India is not Muslim appeasement as alleged by the right wing. It is “the majoritarian bigots who are appeased by allowing them to hound Muslims, attacking their places of worship, bulldozing their residences and means of livelihood, their cultural symbols, their food and sartorial choices.” The present India is the culmination of the century-old project founded on the concept of cultural nationalism by Savarkar in 1923, before Jinnah ever proposed a separate nation for Muslims.

In the lead story, ‘Bulldozing the idea of India,’ Venkitesh Ramakrishnan argues that the bulldozer has now become “a hideous symbol of communal aggression.” It was first employed in UP to withstand the challenges posed by SP and its allies during the assembly elections. Madhya Pradesh, Karnataka and Delhi embraced it soon. The underlying objective is to polarise the country along Hindu-versus-the rest line.

A G Noorani’s scholarly article, ‘RSS and Gandhi,’ ridicules the right wing’s attempts to appropriate the legacies of Gandhi, Ambedkar and Subash Chandra Bose. “All of them despised the Sangh Parivar,” asserts Noorani while highlighting the irony of the assassins of Gandhi staking a claim to his legacy. The author concludes the article with a quote from Ambedkar. “If Hindu Raj does become a fact, it will, no doubt, be the greatest calamity for this country. No matter what the Hindus say, Hinduism is a menace to liberty, equality and fraternity…. Hindu Raj must be prevented at all costs.”

The next article is on the Hindutvaisation of education by T K Rajalakshmi. The New Education Policy (NEP) is all set to brainwash the young minds in schools as well as universities. Hindutva ideas and attitudes are pumped into textbooks. The Bhagavad Gita is replacing moral science textbooks. Leftist historians like R S Sharma and Irfan Habib are kicked out of universities. The attempts to despise the Mughals and the British are too blatant. While the NEP acknowledges that the future will be technology-driven and hence our focus should be on equipping students with relevant skills, the means for achieving that is “taking inspiration from the ancient Indian traditions”! The writer laments that “Ignored totally in the process is the fact that exclusion of the majority from education was also an integral element of the ancient tradition that sanctified an extremely hierarchical social order.”

Rajalakshmi also draws the reader’s attention to the Modi government’s objective of privatising education and handing over the sacred task of moulding the young generation to Hindutva organisations.

In the article titled ‘Media sellout,’ Ziya Us Salam warns of TV news anchors “seeking to outdo one another in propagating the government’s line.” From Aaj Tak to News 18 to India TV, the media in India today is going out of its way to paint the government in golden hues, turning a blind eye to the absence of the rule of law. It is rather shocking to note that the Indian media didn’t think it necessary to ask why the government and the local administration did not follow rules in the recent eviction or demolition drives.

The next article is ‘Force-feeding vegetarianism.’ Now in India, the government decides what its people can eat. The sale of meat is banned during Navaratri in parts of UP. More and more regulations keep coming up about food. The South Delhi Mayor went to the extent of almost seeking a ban on onion and garlic since “99 per cent of households did not use” them! The BJP’s student wing, ABVP, will now decide what students can eat in college hostels. The obvious fact is that there are more non-vegetarians in India than vegetarians. Then why this brouhaha about food? It is just another way to attack a particular minority community.

Towards the end, there is a very elaborate section of the cover story that focuses on the various state government’s attacks on minority communities.

In ‘Fallacy of the Hindutva project,’ Shamsul Islam argues that “With Sangh Parivar rulers pitting one section of Indians against the other, there is no need of any foreign enemy to undo a democratic-secular India.” A very interesting fact pointed out in this article is that there were many Rajputs and Brahmins employed as high-ranking officials by the Mughals. Yes, some of the Mughal emperors were diabolic creatures. That doesn’t make all Muslims devils.

Did the Mughals really persecute the Hindus and seek to decimate that community? If that were true, would there have been a majority Hindu population in the British India? Shamsul Islam raises a lot of such questions and provides answers too.

The long ‘cover story’ ends with a look at what some governors are doing in states that are not governed by the BJP. Instead of helping build up meaningful relations between the state and the Centre, these “glorified ciphers” (governors) are acting as the stooges of the Leader at the Centre.

PS. Media Watch will be a weekly feature on this blog.