The story of two Flags 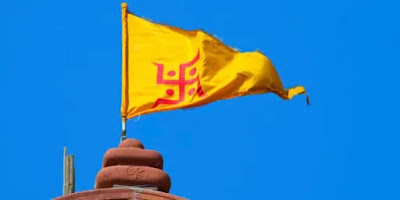 The irony in the Prime Minister’s exhortation to Indians to display the national flag in various places may not be lost on those who know the history of India’s freedom struggle. Modi is fundamentally an RSS man and the RSS was bitterly opposed to the national flag and they refused to hoist that flag on 15 Aug 1947. They hoisted the RSS flag instead.

The classical book, Freedom at Midnight, describes that flag-hoisting thus:

The ceremony being held on a vacant lot in the inland city of Poona… was similar to thousands like it taking place all across the new dominion of India. It was a flag-raising. One thing, however, set the little ritual apart from most of the others. The flag slowly moving up a makeshift staff in the centre of a group of 500 men was not the flag of an independent India. It was an orange triangle, and emblazoned upon it was the symbol which, in a slightly modified form, had terrorized Europe for a decade, the swastika.

Dominique Lapierre and Larry Collins, authors of the above book, go on to say the swastika was on the RSS flag for the same reason as it had been on the banners of Hitler’s Third Reich. It was an Aryan symbol. It came to India during the first waves of the Aryan conquest of India. “The men gathered about it in Poona all belonged to the RSS,” the book goes on, “the para-fascist movement, some of whose members had been assigned the task of assassinating Jinnah along with Mountbatten in Karachi 48 hours earlier. Hindu zealots, they saw themselves as the heirs to those ancient Aryans.”

Who was the leader of this group that hoisted the “para-fascist” flag? Nathuram Godse. At the age of 37, Godse still carried some vestiges of baby fat on his cheeks, “giving him a deceptively young and innocent look.” The newspaper that Godse edited, Hindu Rashtra, left the editorial space blank, “its white columns surrounded by a black band of mourning.”

The RSS mourned India’s Independence. Godse delivered a hate-filled speech after the RSS flag was hoisted on 15 Aug 1947. He condemned Gandhi and his Congress for imposing on India the “horrible sufferings” of the Partition. He led the 500-odd men in front of him to a pledge to sacrifice themselves for the cause of their Motherland.

The book adds that Godse was an utter failure all his life. His failures led him to the RSS whose fundamental hatred holds out a charm to many failures even today. But he wiped out all his failures with one final act of his: the assassination of Mahatma Gandhi. Godse was delivering himself from himself through that act of hatred and vengeance which was intended to look like a historic sacrifice. What are his followers of today delivering themselves from by promoting a flag which their founders detested?