A Game of Dice

His heart seethed with envy as he returned to his palace from the Pandava capital.  In spite of all that he had done to eliminate his cousins, they had become more successful and powerful than him.

“I can feel your heartbeat,” Uncle Shakuni told Duryodhana as they were returning from Indraprastha having attended the rajasuya ceremony meant to proclaim the sovereignty of Yudhishtira.  The envy that wiggled its way like a worm into Duryodhana’s heart during the ceremony had made him so blind that he could not even distinguish between land and water.  He fell into the lake beside the Pandava Palace.  His cousins laughed at him as he was struggling to swim with all the royal robes on.

Shakuni had helped his insulted and irate nephew come out of the lake without stripping himself of all dignity.  “If the step falters, even the elephant will fall,” Shakuni admonished the merry Pandavas.  The elephant was the royal animal of the Kauravas of Hastinapura, city of the elephant.

“I want to capture Indraprastha,” said Duryodhana decisively.  “I want the Pandavas out of my sight forever.”

“Don’t you have everything that your heart craves for?” asked Dhritarashtra when Shakuni conveyed prince Duryodhana’s wish to the father king.  “You wear the finest clothes in the kingdom, you eat the meat of the choicest animals, you have the most beautiful women to attend to you in your bedroom, and exotic horses to carry you wherever you wish to go.  What more do you want?”

“Absolute power is the only thing that can satisfy a Kshatriya,” said Duryodhana. “Which Kshatriya can bear the sight of his rival prosper?  The prosperity of the rival is the beginning of my decline.”

Shakuni came to his nephew’s assistance.  We did everything possible to destroy them, he explained.  But they have prospered.  When you divided the kingdom you gave them the arid lands.  And see what they have done with it.  They built up a prosperous kingdom out of the desert.  If you let them go on, they will conquer us one day.  Power is an intoxication.  The more you have it, the more you want.

Dhritarashtra wavered between dharma and expediency.  Dharma is the path to happiness.  Wielding power is the dharma of the Kshatriya.  What about love for your own kith and kin?  The Pandavas were his own children; how can his brother’s sons be not his own also?  Yet... if they were indeed flourishing more than his own blood, what is his dharma as a Kshatriya?

“Do not hate the Pandavas,” uttered the King feebly.  Obviously he did not believe his own words.  “One who hates is inviting death.”

“Death is preferable to life without dignity,” asserted Duryodhana.  “The Pandavas have aroused my indignation.  Discontent lies at the root of prosperity.  Only he who reaches for the heights, King my father, is the ultimate politician.  Power makes us selfish.  One cannot be both powerful and magnanimous.”

Shakuni knew that Dhritarashtra was a hypocrite.  The words about dharma came from his lips and not his heart.  He had the Kshatriya’s heart, a heart that craves for more and more power.  Relentless craving lies in the heart of every Kshatriya.  Shakuni suggested a solution.  A game of dice.  Yudhishtira had a weakness for gambling though he did not know the game properly.  Yudhishtira was a weak man.  A weak Kshatriya finds his intoxication in proxy wars.  Gambling is a proxy war.  We’ll challenge Yudhishtira to a game of dice, said Shakuni.  He will have to accept it not only because of his addiction to the game but also because it is a ritual to play the game as part of the rajasuya ceremony.

Shakuni was a master of the game.  Yudhishtira understood as soon as he received the challenge that he was going to go down a pit.  The Kauravas were digging his pit.  But he could not decline the challenge.  He was a king and it was a king’s dharma to take up challenges.

Dhritarashtra watched with increasing glee how his nephew was losing and how his son, through the medium of Shakuni, was winning everything that belonged to the Pandavas.  Defeating another is an exhilarating experience, he realised.  His son was right after all.  This is the dharma of the warrior: not merely to be content with what one has but also grab what the other has.  Conquest is the real intoxication.

The game became a passion for Yudhishtira.  In gambling, the more you lose, the greater your passion.  Passion becomes a fever, a disease that eats into your heart.  With every loss your desire to capture back all that you have lost becomes stronger.

The dices were loaded.  Yudhishtira could never see that.  Shakuni was too clever for Yudhishtira.  Dhritarashtra’s dharma had disappeared even from his lips which now bore a greedy grin.  It was as if he wished to swallow the entire Pandava kingdom.

Shakuni roared with mirth.  “We have won. We have won.  There is only your beautiful wife left now,” he told the sullen and stunned Yudhishtira.  “Stake her.  You can win her back and win yourself back too in the bargain.”

The man who had no authority over himself, the man who had lost himself in gambling, the king who had become a slave staked his wife, who was not just his own wife.  Is that a Kshatriya dharma too?  Yudhishtira had neither the time nor the inclination for such considerations.

Duryodhana was already gloating.  He was imagining what he would do with the charming Draupadi.  He could not wait to crush her in his muscular arms.

Yudhishtira groaned at the bottom of the pit he had dug for himself. Is life a game of dice?  You don’t know why you are playing it.  You don’t know when you entered the game, why you did, and when you have to quit.  Does the god of fate load the dice?

His father, Pandu, had his own flings with the game until it bored him and he quit.  He abdicated the throne and went into the forest to become a hermit.  Is hermitage another game of dice?  Or is it escapism?  Is escapism wrong?  What is noble about the Kshatriya dharma?  Isn’t hermitage a nobler dharma?


Yudhishtira brooded.  He has now to follow in his father’s footsteps by necessity, not by choice.  He has to learn the lessons of life the hard way while Duryodhana would take possession of all the grandeur that he and his brothers had built up in Indraprastha.  Victory and defeat: what do they mean?  Dharma and adharma: what do they mean? The forests in alien lands were beckoning Yudhishtira.  The forests would teach him the lessons that he had failed to learn at the appropriate times.
at October 03, 2014

Nietzsche Philosopher Nietzsche saw a man whipping a horse on a street in Turin, Italy. He couldn’t endure the cruel sight. Rushing towa... 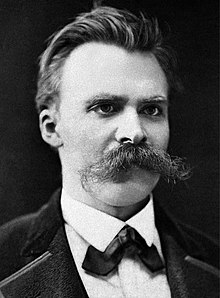