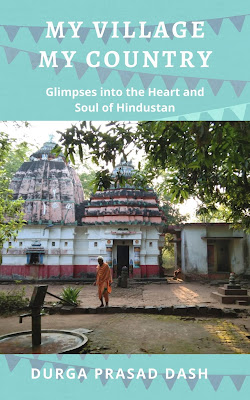 The author of this book, Durga Prasad Dash, loves India genuinely. His patriotism is rooted in deep awareness of the country’s history, culture and values. His latest book, My Village My Country: Glimpses into the Heart and Soul of Hindustan, wears the author’s patriotism on its jacket.

Though the author states in the beginning that the book contains “articles about my village and the small town where I spent most of my childhood,” we are ushered to a whole smorgasbord of the diversity that characterises India. The author’s village is only a springboard. Get ready to dive into an expansive lake of exquisite historical, cultural and aesthetic delights.

Since the author belongs to Odisha, we get more delicacies from that state. We begin our odyssey [or Odissi if you prefer] with the rituals of Bali Jatra and Boita Bandana and move on to a lot more like Danda Nacha and Pala Nacha. We get glimpses of the Konark temple, Raghurajpur’s palm-leaf paintings, and the bronze utensils of Bellaguntha. We get a brief history of the Jagannath rath yatra, a taste of the traditional cuisine at the Pidha hotel in Brahmapur, and peeps into the British Raj.

The author’s style reaches musical crescendos while discussing India’s music and her villages. In the chapter on Classical Music, we get this:

Imagine this scene before the advent of electricity. The sun has set. Nocturnal insects have started making sounds to make their elusive presence felt. People have lit lamps on their doorways. The sounds of bells from a distant temple is wafting through the darkness. It is time to meditate. It is time to take care of one’s unknown fears. You need music that makes you meditative. You need music that stops the restlessness of your mind. If it is a summer evening the music needs to be more soothing.

The author’s description of his village also reveals the romantic in him.

The romantics have a peculiar attachment to history and the author’s attachment to India’s ancient history and heritage is more than eloquent in the book. India has hundreds of factors that distinguish it from other countries, he says. He focuses on a few like diversity and multi-culturalism, birthplace of all Dharmic religions [Hinduism, Jainism, Buddhism, and Sikhism], yoga and Ayurveda.

The romantic attachment to anything tends also to have a touch of bitterness and this author is not an exception. He sounds explicitly bitter when he touches upon the West and its people, liberals of today’s India, and certain historians like Romila Thapar and Ramchandra Guha. He condescends to tolerate the liberals of the West because “When It comes to religion, they usually criticize the religion they were born to or are identified with. But in India this is not the case.” He goes on to mention the examples of Javed Akhtar and Shabana Azmi as well as Rajdeep Sardesai and Sagarika Ghosh. He goes to the extent of accusing these people of defending the radical activities of other religious groups!

Anything associated with the West seems to bring scorn to this writer’s otherwise disciplined mind. He lampoons even Shashi Tharoor’s criticism of the British in his book An Era of Darkness as motivated by political reasons and also sees the same book’s portrayal of the Mughal as “propaganda” that seeks to highlight the Mughal era “as a kind of utopia”. His hatred of the West makes him issue the challenge: “Show me an author, a film director or an artist who has either criticized western values, or highlighted the good things of the east and survived to win such an award. There are still many aspects on which the west continues to be blatantly racist.” [Well, Hermann Hesse comes to my mind instantly.]

Intelligent people with deep convictions tend to have a few prejudices and they also tend to cling to them tenaciously. If we put aside the tenacious clinging of Durga Prasad Dash to his pet prejudices, we can see that he is a good writer as well as a good human being. This last bit is the most important especially because good humans are hard to come by these days. Particularly if they claim to be patriots.

My contribution to the same series Great Books for Great Thoughts are also available for free download here.

January 25, 2023
1. Atheist becomes God " I'll   perform the same miracle that the godman performed just now," Atheist said. He waved his fist in the air as solemnly as Godman had done a while back. Then he opened his fist. "Voila!" he said displaying the ash in his palm. "Simple trick," he said. "Sleight of hand." He waved his hand again and then opened his fist which now contained a golden ring. "Only looks gold, actually fake," he grinned. He explained how he did it too. "No miracle, simple magic." The godman was furious. His devotees now thronged before Atheist. They were falling prostrate at his feet. 2. Dead Sure A man believed he was dead. He stopped eating and lay down in bed quietly. "Do the dead bleed?" The psychiatrist asked. "No," the man said. Psychiatrist took a blade and made a small incision on the man's arm which started bleeding. "See?" Psychiatrist asked. "Yup, I understand,"
11 comments
Read more

January 29, 2023
Pic from Manorama Arif Mohammad Khan, the governor of Kerala, declared himself a Hindu yesterday while addressing the Hindu Conclave at Thiruvananthapuram. The term Hindu is not religious but geographical, he asserted with his characteristic disarming smile. ‘Hindu’ is a geographical term denoting the people of a region, the whole of India. I was excited. Patriotism surged in my veins. Goosebumps embraced my entire body. I am a Hindu, I said to myself. Now I can enter the temple which has been denying entry to famous people like K J Yesudas because of the temple authority’s ignorance about what ‘Hindu’ means. ‘No entry for non-Hindus,’ says a board outside that temple (and many other temples in Kerala). But my governor gave me hope. So I went to the temple. The board is still there. The temple looks slightly different from usual. The crowd is less and there are a lot of police around. Something is wrong, I can see. Maybe, Mr Khan has inspired a lot of other Indians like me and t
2 comments
Read more

January 27, 2023
Title: Valli Author: Sheela Tomy Translated from Malayalam by Jayasree Kalathil Publisher: Harper Perennial 2022 Pages: 407 “It is not the creatures in the forest that we have to fear, it is the creatures among us.” An Adivasi girl named Kali sings those lines in Sheela Tomy’s debut novel, Valli . That is the central message of the novel. Kali is a daughter of the forest. The novel is the story of the degeneration of Wayanad, erstwhile abode of many Adivasis in Kerala. The so-called civilised people from the plains invaded the land of mist and mystery, forests and folklore and brought into it what is known in the mainland as ‘development’. A whole mountain vanished and tourist resorts came up in its place. Forests gave way to townships. “Brokers bringing booze, sex and other amenities into ‘homestays’ sauntered between the township’s grey buildings…” A whole culture that sustained the forests and the hills and the rivers died. It was killed. “Young women transformed themsel
2 comments
Read more