An India Burdened by the Past 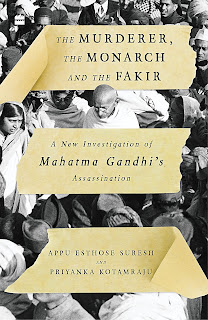 Title: The Murderer, The Monarch and The Fakir

Can both Mahatma Gandhi and his murderer Nathuram Godse be national heroes? The ruling party, BJP, is attempting to yoke the two together. Recently the Home Minister, Rajnath Singh, tried to get the Mahatma’s support for Godse’s guru, V D Savarkar. But his statement was soon proved to be yet another roguish attempt by the BJP to falsify history. There was nothing in common between Savarkar’s allies and Gandhi. More importantly, Savarkar and his allies conspired again and again to murder Gandhi who was antinational in their perception.

The chief contention of the book under review is that Godse was just one of the many assassins of Gandhi, Savarkar being a major figure in the group of conspirators. The authors of this book unearth information from previously unseen intelligence reports and police records to show how the entire Sangh Parivar of those days vindictively bayed for Gandhi’s blood.


Gandhi and the Sangh had diametrically opposite views about India as a nation. Hindutva defined nation rather elusively as “our way of life” which translated as “exclusively” the Hindu way of life. The Gandhian vision, founded on non-violence and benign morality, was as inclusive as any profound vision could be. The Sangh vision was erected on hatred of Muslims in particular and all non-Hindus in general.

The Sangh’s hatred goes back by centuries, argue the authors. “To be a Savarkarite Hindu, one who conforms to Hindutva – one nation, one jati, one sanskriti – is to be a Hindu burdened by the past.” [page 152] Every Hindutva-supporter carries scars that cannot be healed, scars inflicted by Mahmud of Ghazni in 11th century and then many others later. Too many scars that refuse to fade. Scars that breed an irreversible hatred for a community of people who are perceived as the enemy just because they believe in the same god as Mahmud of Ghazni did. These scars metamorphose into a phantasmagorical phobia in the collective consciousness of a few million people who are led to believe that Hindu khatre mein hai.

Someone of no less political stature than L K Advani was driven by that phantom-phobia to start a whole disastrous rath yatra from Somnath, the place where Mahmud of Ghazni raided a Hindu temple a thousand years ago. The phantoms kicked up by Advani along the way ended up demolishing the Babri Masjid in Ayodhya and creating communal riots in too many places.

This same Mahmud’s ghost had haunted Swami Sampurnanand Saraswati’s introduction to Savarkar’s book on the Moplah riots. The Moplah riots played a very significant role in shaping the Sangh outlook, argue the authors of the book under review. Muslims replaced the British as the primary enemy of the Sangh. Secondly, Gandhi became an appeaser of Muslims rather than a freedom fighter.

It was Gandhi who put the Hindu in khatre. By upholding the interests of Muslims above those of the Hindus. Gandhi always demanded sacrifices from the Hindus so that the Muslims would benefit. Even after the Partition, Gandhi was only interested in the welfare of Pakistan and arm-twisted the nascent Indian government into parting with an enormous amount of Rs55 crore for that enemy nation.

Worst of all, Gandhi emasculated the Hindus by imposing on them an effete philosophy of satyagraha and non-violence.

In short, Gandhi was the worst enemy of Hindus. He put Hinduism in dreadful dangers. So he had to be eliminated. Gandhi was eliminated to save Hinduism from… From what? From the macho enemies who ate non-vegetarian food.

The ghost of Mahmud and the many other ghosts (like the Mughals’) continued to haunt the Hindu-in-khatre even after Gandhi was done away with. So the Sangh encouraged the Hindu to display their masculinity by lynching perceived enemies, by undertaking missions like ghar vapsi, by legislating Citizenship Acts, and so on.

This review has focused on the last of the three parts of the book. The first two parts are about the history and the conspiracies that led to the Mahatma’s assassination. The burden of the authors is to show how it was not just Godse or a couple of individuals that wanted to kill Gandhi but a whole big gang of the Sangh Parivar. It was a gang of men (no women in the Parivar even today, not many at least) who never had the “ethical sensibility and spiritual imagination” needed to understand the profundity of Gandhi’s vision.

Much of what this book contains is already known to those who are familiar with the history of Indian freedom struggle. There is some additional evidence, that’s all. But the book is a timely reminder of what truly transpired – without the distortions that the ruling party, burdened by a very long past, is dishing out again and again.