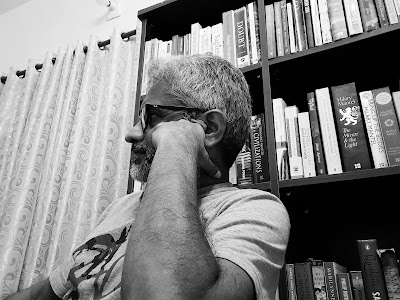 As soon as I was permitted to read after my cataract surgery, I resumed reading Benyamin’s Malayalam novel whose title translates as The 20 Communist Years of Manthalir. Since most readers of this blog do not read Malayalam, I shall not venture to provide a review of the book. But I loved the novel so much that I would like to look at one of its major themes: the ineluctable human discontent.

We keep searching for something in life. It may be happiness or meaning or a purpose for living. The achievement of our goal leaves us disillusioned and hence yearning for something else. All the prominent characters in this novel are seekers of something that would add more value to their lives. Some seek it in religion, some in Communism, and a few others in common worldly successes. Those who seek it in ordinary worldly things seem to be the luckier lot. It is quite easy to become a success in some profession, earn money and live a quotidian life. If you wish to go beyond the mediocrity of job-recreation-procreation, you are doomed to face discontentment in its various avatars.

Those who swear by religion in Benyamin’s novel end up wondering about the meaning of their piety and rituals. Most people’s religion is little more than a desire for a community, a sense of belonging to something that feels beyond the mundane, and/or the fulfilment of a need to follow a herd. The ideals preached by your religion crumble like wafers under a horse’s hooves in the face of real-life challenges. For example, fraternity crumbles when it comes to elevating a low caste person to priesthood. Gender equality crumbles when it comes to letting a woman lead the Sunday service in a church. We fight over a million things in the name of our gods and each time religion dies with something more than a moan.

Even a priest in Benyamin’s novel ends up as a disillusioned person. He became a priest in order to be of greater service to people. But his religious leaders like the bishop and the cardinal wanted him to become just another professional like a doctor or a lawyer. The only difference is that he is wearing the priest’s habit. This priest in the novel is not a fictitious exception.

On the other hand are some of the Communists in Manthalir who are compelled to face today’s reality in which Communism has no meaning whatever – neither as an ideology nor in practice. Nobody practises it anyway today. As an ideology it is highly questionable with its insistence on placing the party above the individual. Who is more important: the party or the individual? Who is more important: the majoritarian herd or the lost sheep?

Those who follow religion for finding solace in life are left as disillusioned as those who follow ideologies in Benyamin’s novel. The case is not different in life, of course. That is why the novel impressed me tremendously. The novelist presents the inevitable human dilemma of quest and discontent very convincingly.

In the end, each individual life becomes a kind of tale fabricated by the individual as well as others associated with him. A tale not very different from the one narrated by Shakespeare’s idiot: full of sound and fury, signifying nothing much.