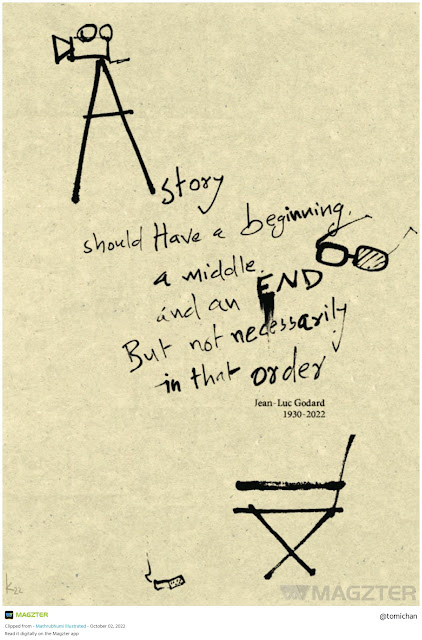 One of my favourite short story writers has been Somerset Maugham for a long while. The most obvious reason is that the characters he presents in his stories are hauntingly fascinating. The second reason is the themes he deals with. And I must add his quintessential cynicism to the list too. He didn’t hold humanity in high regard. In the words of one of his own characters, “Perhaps the best of us are sinners and the worst of us are saints.”

Deftly crafted characters and themes carved straight from ordinary human life are the primary ingredients of a good short story, for me. Maugham had the additional virtue of telling those stories in a simple, unadorned style that keeps the reader hooked till the end. His insights into human nature were shrewd. Maugham didn’t go for the kind of technical gymnastics we find in today’s stories.

Let me present just two of his characters to illustrate what I’m saying. One is a zealous Christian missionary named Davidson who is determined to reform a ‘loose woman’ in the story titled Rain. Davidson doesn’t ever take a No for an answer when he is on God’s work. Saving souls for God is his only mission and he will do everything in his power to accomplish it. But Miss Thompson doesn’t give a hoot about his spirituality. Until she gets the official order to surrender herself to the penitentiary – three years in prison, in plain words. The very thought of the San Fransisco prison transforms her. The woman who was haughty and domineering now becomes a beggar at the missionary’s feet. But the man of God doesn’t relent. He thinks the suffering in the prison is necessary for her redemption. She owes it to God. What the missionary fails to understand, however, is that it is his gargantuan ego that wants to see her suffer in a prison. Even the benign Dr Macphail’s intervention fails to save the woman from the punishment. However, the usual twist in a story of Maugham’s takes us by surprise here too. Davidson spends a night with Miss Thompson trying to enlighten her on her obligations to her own soul and he is found dead in the morning. He has slit his own throat. And Miss Thompson returns to her old ways with unconcealed bitterness which erupts as an abuse hurled on the very face of her best benefactor, Dr Macphail: “You men! You filthy, dirty pigs! You’re all the same, all of you. Pigs! Pigs!” The last line of the story is: “Dr Macphail gasped. He understood.”

We too understand with a deep tremor that at heart the missionary was worse than the prostitute.

The theme of The fall of Edward Barnard is similar. The man who appears to be a saint may be worse than a sinner and vice versa. Arnold Jackson in this story is an amoral character who influences a young Edward Barnard to an iconoclastic life. This story shocks us out of our notions about success and happiness in life. Is success about achieving high positions and earning a lot of wealth? Or is it living your life with relish though you may not achieve anything much at all? Edward chucks a very promising career in order to pursue what he understands as simple happiness. Ordinary people would consider him an utter failure. He thinks of himself as a huge success, however, though he lives from hand to mouth. But he says that he “lives in beauty” while what is usually perceived as successful life is “trivial and vulgar” for him.

Maugham’s stories were written in a time when writers hadn’t become painfully complex. So the plots are quite linear. The narratives are simple and straightforward. I love those stories. I think simplicity and straightforwardness add to the beauty of good stories.

I am aware, however, of the complexities that have descended on the present world. When the world is so complex, stories can’t be simple and straightforward. One of the best short story writers of my mother tongue, Malayalam, is Zachariah. The latest story of his that I read is Ammalu. Ammalu is a prostitute. There are two other characters in this story: an impoverished script writer and a young girl who is being looked after by Ammalu. All three are people living on the margins of the society. But they have more goodness at heart than the people in the mainstream for whom Godse is the hero. Ammalu’s father was a Communist who adored Gandhi. Today we have political leaders who are so religious that Godse acquires divine proportions in their worldview. Zachariah leaves us with a pang in the heart at the end of this very short story in which nothing really happens.

PS. This post is a part of Blogchatter Blog Hop : How to tell a story effectively? #BlogchatterBlogHop