I have a student in one of my present classes who gives me the creeps. He holds everyone in contempt and thinks that he is the only perfect human being. He has a magnanimous attitude towards his mother, I observed, whom he resembles way too much and who thinks that her son is nothing less than an adorable prince. Let me call him Holden after the protagonist of J D Salinger’s celebrated novel about an adolescent’s inability to grow up.

Holden – mine and not Salinger’s – lives in his own world even if he is in the classroom not even pretending to be listening to the teacher. He dreams keeping his eyes open when he is not really sleeping. I have always wondered what he could be dreaming about. It took me a while to realise that all his dreams are about himself because nothing engages his mind except himself wherever he is.

Holden thinks that all other people are nothing more than insects beside his eminence. He misses no opportunity to sneer at people, their appearance, views, anything. Nobody and nothing comes up to Holden’s expectations. If he is awake in the class, the teacher can expect some snide comments from him made privately of course. If you ask him what he said to his companion, he will just shrug his shoulders insolently.

A few months back, I told Holden that we could perform a miracle together if he descended from his royal perch. I told him that a miracle is nothing but a change of attitude. Just change the way you look at the world and yourself, and the miracle will happen. You will begin to love the world. And yourself too. Holden gave me his usual derisive smile.

I didn’t give up, however. Holden holds a sway over me merely because he reminds me of my own adolescence. I had problems with myself as well as other people though I didn’t express my contempt as openly as Holden does. I wanted to save Holden from himself just as much as I wished there were such a redeemer for me in my adolescence. I am redeeming myself vicariously now by trying to redeem Holden. 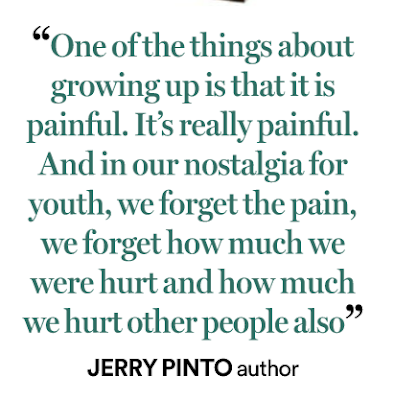 “One of the things about growing up is that it is painful,” says Jerry Pinto in connection with the release of his new novel The Education of Yuri. “It’s really painful. And in our nostalgia for youth, we forget the pain, we forget how much we were hurt and how much we hurt other people also.”

Holden hurts me but not as much as I hurt him. I accept Holden’s hurts with a self-conscious awareness that comes from learning and experience. I let Holden be hurt assuming that it does him some good – sooner rather than later. I do believe in miracles.

PS. This was provoked by Indispire’s new prompt: dedicate a post to the wonderful weirdo in your life. #wonderfulweirdo