"... The deaths of twenty Indian soldiers [in the Galwan Valley] did nothing for the morale of the very soldiers from whose shoulders Prime Minister Modi and his BJP like to fire the empty bullets of their nationalism."

Shashi Tharoor, The Battle of Belonging 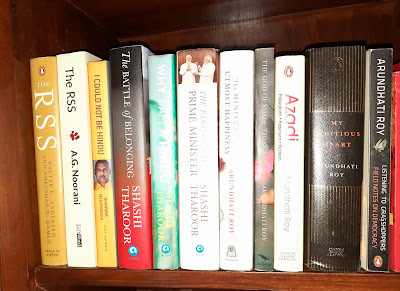 Nationalism is quite an absurd thing in independent nations. When you are free as a nation to forge your destiny any way you want, what job has nationalism to do? Nationalism is an assertion of a nation’s rights and privileges against an enemy. For example, India’s nationalism during the British rule was needed and valuable. Once the coloniser is gone, nationalism should give way to nation-building.

Whatever the variety, nationalism has something clannish about it. Tharoor quotes British philosopher Karl Popper: Nationalism “appeals to our tribal instincts, to passion and to prejudice, and to our nostalgic desire to be relieved from the strain of individual responsibility which it attempts to replace by a collective or group responsibility.” India under Modi is the best example for the worst kind of clannish nationalism with all its hatred of certain communities of people in the name of love for one particular religion and culture.

The second section of the book is titled ‘The Idea of India’ and shows how everybody in the country is in one or another kind of minority. The whole Sanghi argument that India belongs primarily to Hindus raises a very pertinent question: Which Hindu? Tharoor shows that the Hindus in India are not at all a homogeneous community. There is far more in common between a Hindu and a Christian in Kerala than between a Yadav of UP and a Vellalar in Tamil Nadu. It is certain politicians like Modi who thrust an axe between the Hindu and the Muslim and the Christian. The real issue is, argues Tharoor, “whether Indians should let intolerant politicians, convinced of their own righteousness, decide who is qualified to be an authentic Indian.”

One of the many interesting examples cited by the author to show that India was a far better place before Modi took it over is from 1971 when the Indo-Pak war occurred. “The Indian Air Force in the Northern Sector was commanded by a Muslim (Idris Hasan Latif); the Indian Army commander was a Parsi (Sam Manekshaw); the general officer commanding-in-chief of the forces that marched into Bangladesh was a Sikh (Jagjit Singh Aurora), and the general flown in to negotiate the surrender of Pakistani forces in East Bengal was Jewish (J.F.R. Jacob). That was the idea of India…” Can you ever get that India back? The answer is arguably Modi’s most disastrous contribution to the idea of India.

In the third section Tharoor looks at ‘The Hindutva Idea of India’. He lays bare the fangs of RSS heroes like Savarkar and Golwalkar. The very ideology of the RSS is akin to what created Pakistan and Modi has made India a “Hindu Pakistan”.

The fourth and fifth sections analyse the present India that is largely Modi’s creation. “Here is a prime minister,” writes Tharoor, “who has upended practically every civilized convention in Indian politics, unleashing law-enforcement authorities to pursue flimsy charges against an array of Opposition leaders (and locking up a former home and finance minister, P. Chidambaram, for 101 days without trial), promoting ministers whose divisive discourse against Muslims has left them and other minorities fearful, and so thoroughly intimidated the media and its owners that his press coverage is an embarrassment to India’s long tradition of an independent and uncowed media.” Modi has trivialised all the greatness that remained with institutions. He has criminalised opposition and dissent. He has communalised everything from food to clothes to love. He has vitiated the very air that Indians breathe. He has destroyed the very idea of India that great leaders like Gandhi forged with much pain.

“Where do we go from here?” The first chapter of the last section asks. Will the readiness of Muslims and other non-Hindus in India to accept Hindutva in theory be a solution to the present imbroglio created by Modi? No, asserts Tharoor. “Surrender rarely leads to the victor conceding the demands of the vanquished…. Surrendering to this dystopia, far from ending the Hindutva project, will merely whet the appetite for more hatred and polarization.”

This is yet another brilliant work from Dr Tharoor.

PS. My reviews of other books by Tharoor:

Why I am a Hindu: Shashi Tharoor’s Hinduism

PPS. The other books in the pic which is from a shelf of my lpersonal library are also reviewed in my blog. Just Google and there you are.