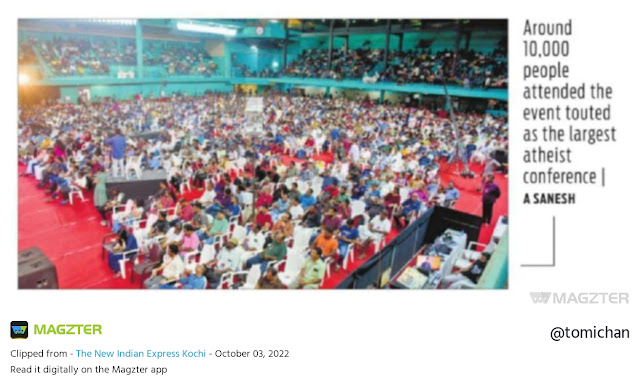 Around 10,000 people assembled yesterday [Gandhi Jayanti day 2022] in Kochi to proclaim their atheism loud and clear. It was advertised as “the biggest atheist conference in the world.” Is God dying?

In America, church membership has been declining consistently in the last few years. The renowned Gallup poll informs us that more than half of the Americans have given up church. The attendance in church was 70% in 1999 and 50% in 2018. In 2020, 47% of Americans said they belonged to a church.

The Pew Research Center predicted in 2015 that by 2050 the Muslims will nearly equal the number of Christians around the world. Atheists will make up a declining share of the world’s population, according to Pew. But the gathering in Kochi yesterday seems to be contradicting that. More and more people seem to be getting disillusioned with religion and god.

I am yet to come across any reliable study which suggests that gods will become extinct in a few decades though I raised the provocative question, “Will religion survive beyond 2040?”, on a bloggers’ platform recently. My hunch is that religion will continue to hold its sway over the masses for a very long period ahead. Religion is a drug, as Karl Marx said. It is a very effective drug. People aren’t going to give up its pleasures easily. The pie in the sky will continue to charm too many people for too many more years. Atheists can have their parties in Kochi or anywhere but their influence on the masses will remain insignificant.

I am not a believer. But I don’t attend meetings of atheists and/or rationalists simply because I think when it comes to religion silence is the best option. You don’t have too many options here. You either believe or don’t believe. Yes or No. That’s all. Debates are meaningless because debate belongs to the rational level while faith lies in the nebulous regions between the winking stars. Faith and reason have nothing to do with each other. Don’t ever argue with a believer. You will not only waste your time totally but also may end up losing your limbs or even head. Belief is a flame while reason is an iceberg.

A friend of mine living in Ireland narrated a telling incident when he came on holiday last year. “One Sunday, when the Mass was over,” he said, “the priest who said the Mass made an announcement. ‘This is the last Mass in this church,’ he said.” The church was sold as there were too few attendees. In a few weeks’ time, a pub stood in the place of the church, my friend told me. “And the attendance now is good.” The irony was not lost on me.

I don’t know whether a pub offers better intoxication than a church. I enjoy a drink once in a while. I am also conscious of the changes that alcohol can bring to my thinking and behaviour. Some of those changes are not good. But when I look at the multifarious evils that religions bring about (terrorism, jihads, ghar vapsi, and what not), I’d prefer the pub to the church at any time.

During a journey yesterday, Maggie and I entered a church at Chengalam in Kerala. It is a minor pilgrimage centre. It holds within a shrine the relics of many saints including Don Bosco who was my patron for a brief period of my life. I loved the serenity in that shrine. The very air in that deserted place could inspire noble sentiments in me. How are some people spirited to perpetrate acts of violence after praying in such a place? I may never understand that. But it is such people, believers who act like criminals or subhuman creatures, that create a revulsion within me towards religions. I wouldn’t have gone anywhere near the Chengalam church or its shrine if there were any worshippers anywhere around. I’m scared of religious people.

The gods themselves are quite innocuous. Their defenders are the real menace. Standing in the mesmerising ambience of the shrine at Chengalam, I did raise a question to the crucified god there. “What can I give you?” God wouldn’t need my worship. Nor my defence. Nothing. God doesn’t need anything from me. What am I but a helpless tiny creature on a small planet in a minor constellation in the infinite spaces? Who am I to anoint myself as a defender of god? I felt humble. That humility is what religion really is about, perhaps.

Will religion survive beyond 2040? I raised the question myself at Indiblogger. I knew that it would. Then why did I raise the question? I don’t want religion to survive the way it does now. Did I tell that to the crucified god in the Chengalam shrine? You bet I did. And his response? He smiled lying helplessly on his cross.