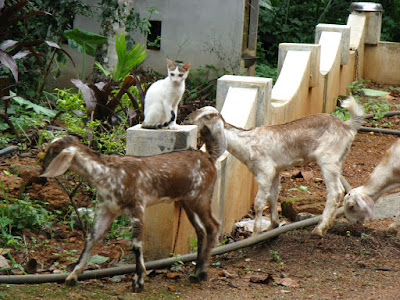 When I was a kid I was taught that God was a mystery. God’s mysteriousness was the ultimate answer to all questions which had otherwise no sensible answers. Why did God create the graceful deer and at the same time the murderous tiger? Answer: God’s ways are inscrutable, boy.

I grew up and found it impossible to accept that answer. Like William Blake, I was buffeted time and again by the question whether the same god created both the tiger and the lamb. “What immortal hand or eye / Could frame (the tiger’s) fearful symmetry?” “Did he who made the Lamb make thee?”

The poet sees God in the lamb too. “He (God) is called by thy name,” the poet tells the lamb. “He is meek and he is mild.”

Who is the real god now? The fearful symmetry of the tiger or the gentle meekness of the lamb: which is the real face of god?

Are the terrorists who keep killing ordinary people in the name of certain gods the real men of god? Is the boy who chopped off the head of his teacher for the sake of a god the really religious person? Are those who erect gigantic temples the real representatives of god? Is the God of the Tiger the only real God?

Mystery, my mother answers. She is no more. I can hear her but. When I gave up her answers long ago as a young man, she collapsed. Her blood pressure had shot up. Her veins couldn’t absorb my mounting rebellion against god. Her God was the meek and mild god of the lamb. Her god was the lamb who sacrificed itself on a cross with a pathetic cry: “My God, my God, why have you forsaken me?” For me that god who died on the cross was the wretched antithesis of the Old Testament’s capricious autocrat.

Neither the god of the tiger nor that of the lamb makes sense to me as long as both exist. The capricious autocrat of the Old Testament would make some sense because this world of ours seems to be his creation going by all the cruelty, gloom and utter nonsense that characterise it. None but a sadist could have created this. Lambs are meant to be eaten by tigers.

But I hate that god. I can stand and admire the meekness of the lamb and the gracefulness of the gazelle. Even the tiger’s fearful symmetry is admirable. But I prefer the former. My favourite lines in the Bible belong to Solomon.

Your eyes are doves behind your veil….

Your lips are like a scarlet thread, and your mouth is lovely.

Your cheeks are like halves of a pomegranate behind your veil….

Your two breasts are like two fawns, twins of a gazelle,

that graze among the lilies…

I would love a romantic goddess, not the dour old man who goes by whims and fancies, gives commandments like governments giving UAPA and stuff at one moment and then issues sops at the next or mounts a cross and laments helplessly like a universal martyr. I can admire the mystery of the rose and the worm that is eating into its virgin beauty. I can admire the mystery of the lily of a day that is “fairer far in May”. But God, I’d rather have him face-to-face and heart-to-heart like Solomon’s gazelle “springing across the mountains, leaping across the hills…” with joy in the eyes and love in the heart.