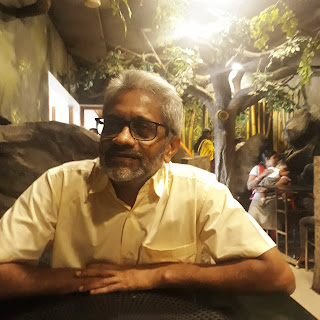 Having completed 35 years of teaching, I retire with that monthly pension. Someone had warned me not to count on the pension at all as the amount won’t be enough even to meet one’s most basic requirements. But I had not imagined the amount to be as beggarly as what landed in my bank account on the first working day of this month.

My first impulse was to laugh as I stared at the phone message: “Your A/C [number] has credit for BY SALARY of Rs 1812…” [sic]. I thought it was some mistake. When I found out that it was the monthly pension granted to me by my magnanimous government which is Sabka Saath for Sabka Vikas, my laughter became boisterous enough to draw Maggie’s attention.

“What’s the joke?” She asked. She was not quite chuffed with our government’s largesse. “Be a true patriot and chant three cheers for our Minimum Government, Maximum Governance,” I advised her.

“We are children of lesser gods,” I philosophised with a grin that would erase any touch of sentiment. Anyway, sentiments have been hijacked lock, stock, and barrel by the nationalists nowadays and there’s not much of that stuff left for the sickluars and libtards like me. Ours are the jokes like the ‘pension-salary’.

Government employees are the children of the greater gods. They work less, get paid the highest, earn in addition through bribes, bonuses, and allowances, and then retire with huge pensions. “Even our future Constitution, Manusmriti, advocates such divine inequalities,” I concluded.

The phone rings interrupting my theological defence of the divine inferiority of the private sector employees. The call is from the pension office. “You have to submit your Jeevan Pramaan in order to continue receiving your monthly pension…”

It’s then I realised that retiring from job puts on you the comic onus of proving to your government at regular intervals that you are still alive by producing a certificate called Jeevan Pramaan! Being a pensioner is quite a tough job, even if your pension is peanuts.