Nehru: a meeting of East and West 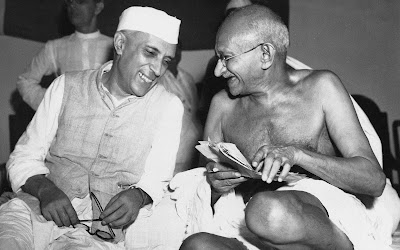 Today is the 131st birth anniversary of Jawaharlal Nehru, the first Prime Minister of India. A tribute.

Nehru studied in England for seven years after which he wrote: “I have become a queer mixture of East and West, out of place everywhere, at home nowhere.” His profound philosophical and romantic longings made him out of place in the West while his love of science and technology rendered him out of place in India.

The India that Nehru inherited from history’s mishmash was a wretched place. In the words of Dominique Lapierre and Larry Collins [Freedom at Midnight], India in 1947 was a country that had a leper population the size of Switzerland. There were as many priests in India as there were Belgians in Belgium, enough beggars to populate all of Holland, 11 million holy men, and 20 million aborigines. Some 10 million Indians were essentially nomads, exercising hereditary occupations as snake charmers, fortune tellers, gypsies, jugglers, water diviners, magicians, tight-rope walkers, and herb vendors. About 38,000 Indians were born every day, a quarter of them to die before the age of 5. Ten million other Indians died each year from malnutrition, undernourishment, and diseases like smallpox.

But India was very religious. It was the motherland of a historical religion (which ironically is still searching for its roots and striving to get a facelift). It was the birthplace of Buddhism, Jainism, and Sikhism: all pre-eminent religions that put a premium on humaneness. It was also a country of a sizeable population of Muslims who chose to stay back in spite of the agonising Partition. Over 3 million deities watched over this new country.

Nehru was an agnostic, however. The plethora of gods horrified him. He knew they would serve no practical purpose in redeeming a country steeped in poverty, diseases, ignorance, and superstitions. The very word ‘religion’ horrified him. He despised the priests, sadhus, chanting monks, and fervent sheikhs. The gods and their men together impeded the country’s progress, Nehru was convinced.

Nehru sought to replace these serious impediments with his own version of secularism. Secularism was more of a Western concept than Indian. But Nehru Indianized it by being philosophically tolerant of religions instead of excluding them altogether. Nehru’s secularism is one of his most profound contributions to the country. Unfortunately that hybridisation of the West and the East was never rightly understood or implemented in the country. Even the Congress successors of Nehru failed in this regard. Instead of keeping religions confined to temples and the personal dark alleys and byways where they belong, the Congress used them as vote banks and corrupted the entire polity of the nation. It is this corruption, more than anything else, that cost the Congress heavily, so heavily that the party is on the verge of extinction today. Worse, the very thing that Nehru tried to put on the sidelines has emerged as the strongest force in the country, threatening to swallow the whole nation.

The greatest irony, however, is that today’s leaders who have replaced Nehru in the heart of Delhi lack any profundity or vision. Their religion is just a political tool and little more. Their vision is stuck on some gargoyles of an unduly glorified past. They splash in the bilge waters of history and imagine that they are grappling with the tides of future destiny.

Like all humans, Nehru too had his flaws and limitations. But those flaws and limitations were just little stains on a fabric that shone brilliantly otherwise. If he did not fit in well anywhere, it was because people were incapable of seeing beyond those small stains. Nehru belonged to the cosmos. That is why the east and the west met in him harmoniously.