Social Media and I 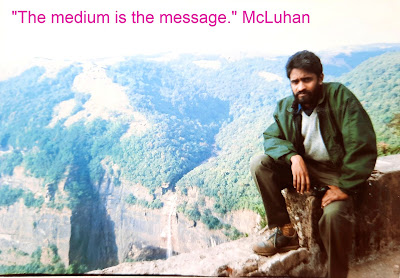 We live in spurious times. The realities around us are manufactured by the media, by governments, corporations, religions, and organisations. What is really tragic is that spuriousness is accepted as normal. You keep sending messages knowing that they are spurious. You know it, the receiver of your messages knows it, everyone knows it – that the messages are spurious. Yet the messages keep coming and going. Infinity of them.

They have a purpose. Otherwise they wouldn’t survive so long. The method wouldn’t survive, rather: the method of manufacturing realities through fake messages on various media. The process is not confined to social media; you can find it in all the media: the print, the electronic, you name it. Don’t forget that even the road is a part of media. Have you observed the enormous billboards on roadsides? If you have, you will understand how they manufacture realities for you.

We can’t live without the media. One way or another we are all parts of it. We receive messages from there, we forward those messages, we are both the prey and the predator. “We become what we behold,” as Marshal McLuhan, philosopher of the media, said. “We shape our tools, and thereafter our tools shape us.”

Our governments know that and they spend huge portions of their revenues on propaganda, on manufacture of realities. There are paid advertisements on the various media and then there is the paid news. There are ingenious other methods too. Even a Statue of Unity is a propaganda measure.

We can’t ignore the media anymore. Even the social media with all its inanities and puerilities deserves our engagement.

I make use of the social media for various purposes though I confine myself mostly to Facebook and marginally to Twitter. WhatsApp is used nowadays in professional occupation more than for anything else. My primary purpose of joining Facebook and Twitter was to publicise my blog posts and a significant number of my readers do come from these two media, according to my Blogger dashboard. But it amuses me no end that hardly anyone has promoted my posts on these media. There’s hardly even a like. So I am forced to conclude that the readers who come from these media are not necessarily people who like my writing; they are probably provoked negatively by my writing. They are people who would love to drive in a knife between my ribs if they could. I have often wondered why I fail so miserably as a writer: why I don’t inspire more than provoke. I guess I can’t help my own perversions.

The subject of this post is more social media and less I. So let me return to it.

From promoting my blog, I moved on swiftly to learning a lot from the social media. I began to take note of certain pages on Facebook like Beef Janata Party and Unofficial Dr Arnab Goswami which enlightened me in their own unique ways. I began to read quality stuff brought by online portals like The Wire and The Quint. I found these portals bringing more and better information than my morning’s print newspapers.

I find the social media useful and productive. I use them effectively, rather. I guess it is up to us to choose how we use the media. Occasionally I put up pictures on Facebook and they get a lot of likes. But my writing seldom does. I would have preferred the other way around. I wish my writing drew more positive attention. But a fish can’t choose its kind of water.

PS. This was provoked by Indispire Edition 351: How are you managing Social Media? Are you up-to-date in sharing images, posts, comments, replies etc.? Any SM management tips? #SocialMediaTips