My association with the ICICI Bank goes back by about twenty years when I opened my account at their Saket branch in Delhi. The first thing that struck me about the bank was the suave and deferential ways of the staff which was a stark contrast to what I was used to in the other two banks which I was compelled to associate myself with. The Punjab National Bank which had my salary account was an utter disaster with its rude and listless staff. The State Bank of India which held my PPF account was the pinnacle of inefficiecy. ICICI came as a pleasant and welcome contrast. However, that bank too underwent an evolution in the wrong direction as time went. When the number of clients rose and the workload became heavy, the gentleness of the staff was the first casualty. Nevertheless, the bank remained far superior to the other two.

When I shifted to Kerala I transferred my account to the branch in my hometown. Here the staff were exquisite. But I hardly had to visit the branch because I had learnt to do most things online. I must say that the bank’s online services are excellent too.

My romance with ICICI is coming to an end, however. The reason is that one rude and semiliterate staff member sitting in Mumbai blocked my email id for raising a genuine grievance. I wanted to redeem my credit card’s reward points which had crossed 4000. I wanted to redeem those points for the Rs1000 gift voucher of Amazon as I always did. But then my reward points had vanished into thin air. I asked an officer of my branch and was told that the bank was changing the reward point system and it would take a while to rectify certain errors. I was asked to wait. I waited for two months and nothing seemed to be happening. So I sent an email to the customer care department.

The response baffled me. On the one hand, it said that ICICI had closed its partnership with Payback on 31 March 2022. On the other hand, it asked me to redeem my reward points from Payback and gave me a link which of course was meaningless because Payback had no more business with ICICI. And absurdly the mail said, “Currently we are unable to check your available payback points also.”

I sent another mail asking them to cancel my credit card if they couldn’t help me with a simple grievance. If they had told me honestly that I lost my reward points because of their sheer inefficiency I would have accepted the honesty as well as inefficiency. But I didn’t like their prevarication. So I sent my third mail in which I told them explicitly to cancel my card. Then they blocked me! 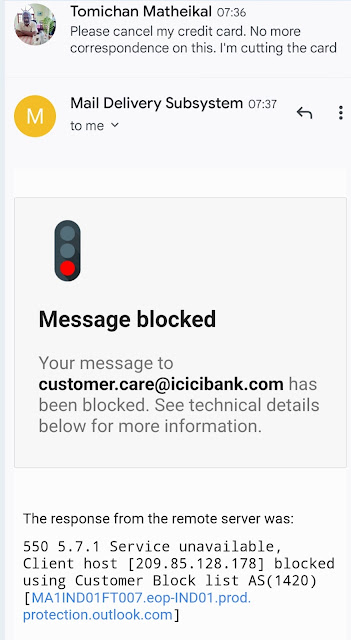 I have decided to end my association with ICICI Bank altogether. There are just a couple of services which are linked to my ICICI account. As soon as I manage to change those links, I will say goodbye to ICICI. I don’t wish to bank on a bank that blocks a client who has a genuine grievance.