Too Hot to Live 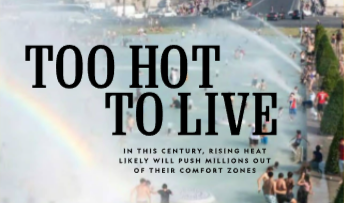 "Rising heat in the 21st century is likely to push millions of people and entire regions out of their comfort zones," warned The National Geographic magazine a few months back. The earth is witnessing phenomenal rises in atmospheric temperatures.

The summer of 2003 scorched the planet. France experienced a temperature of 40 degree Celsius for eight consecutive days. 15,000 people died in that country because of the heat wave. It was Europe's hottest summer in 500 years and it took a toll of 70,000 lives in that continent.

The last six years have been the warmest ever recorded globally. It is not just about temperature. There are other disastrous consequences like hurricanes, drought, rising sea levels and sporadic wildfires.

The heat affects the people's psyche too. Exhaustion due to heat can make people highly temperamental. It has been found that hotter weather leads to more violence and crime. It lowers children's creativity. Overall productivity shrinks tremendously.

The International Labour Organisation estimates that high heat levels will cut working hours by 2.2% which translates as loss of 80 million full-time jobs.

By 2050, American Southeast may become unfit for agriculture because of heat. India's prospects are no better. In fact, India will fare worse than many countries with its humongous population which is being driven into more and more poverty by the present government's policies. Millions of Indians will have no way of beating the beat. Only 8% of Indian households have air-conditioners. A greater percentage have no houses at all, let alone air-conditioners.

All those who can afford it may fit air-conditioners to their houses. A visit to India's metropolitan cities will reveal a ghastly picture of air-conditioners jostling with one another on the walls of apartments. The International Energy Agency projects that the number of AC rooms will soar to 5.6 billion by mid-century from the present 1.6 billion. A few million of them will be in India too.

The AC technology exacts a heavy price on the planet because it releases gases that raise the atmospheric temperature. In short, the ACs are part of a vicious cycle: we use them to cool ourselves and they in turn heat up our atmosphere more and more.

Make necessary modifications to lifestyle or perish. That seems to be the only message we can learn from the situation. We should learn to accommodate a certain degree of discomfort for the sake of the planet and the future generations. For example, the car may not be needed every time you have to go somewhere. Some walking is good for health - yours as well as the planet's. A ceiling fan may be enough instead of an AC. [Air-conditioners are turning out to be one of the largest causes of global warming.] Fossil-fuels may have to be given up eventually. [Indian government is going out of its way to discourage the use of fossil-fuels by raising their prices every day invariably.]

There was a time when ascetics embraced discomfort and pain willingly as ways of soul-purification or self-discipline. It may become necessary for all of us to learn to accept certain discomforts for the sake of the planet. Or else, the planet won't be there as a suitable habitat for us.