“Motives make actions right or wrong,” Arjun said to his son who wondered why his father was so staunchly opposed to right wing politics. Shyam was 14 years old but his relationship with his father remained as cordial as it ever was, untinged by any adolescent rebellion. Rebellion was obviated by the unique bond that the father had built up with the boy right from his infancy. Father and son can be good friends forever – that was one of Arjun’s many axiomatic truths.

“Let me tell you an incident,” Arjun said. “Straight from history.” History is stranger than fiction, Arjun used to say. That was another axiom of Arjun’s. He was a history teacher and he should know.

“Now visualise this. 14 March 1921. A damp day in Berlin. A burly man in a heavy grey overcoat is taking a stroll in a public street. He is 47 years old. A young man of 24 pulls up behind him, places a revolver at the back of the older man’s head and shouts insanely, “This is to avenge the death of my family!” And he pulled the trigger. The pedestrians immediately overpowered the killer who was beaten black and blue before the police arrived and arrested him.” Arjun paused.

“Who were the two men: the killer and the victim?” Shyam asked. If they’re from history, they can’t be mere ordinary men.

“The victim was Mehmed Talaat and the killer was Soghomon Tehlirian.” Shyam had no idea who they were. Arjun continued, “Talaat was responsible for the death of about a million people some of whom were Tehlirian’s family members.”

“Killing one person is a crime,” Arjun said, “but killing a million is nationalism.”

“Yes, Turkish nationalist who hated the Armenian Christians in his country. Nationalism is more about hatred of a certain community than about love of anything.” Arjun never wanted his son to be a nationalist. National borders are imaginary creations of small minds, he used to say. Big minds are citizens of the cosmos.

Arjun put the clear picture before his young son. It was a war by a government against a section of its own people. The Armenians were treated like slaves. Their churches were desecrated. Schools were closed. Those who consented to convert to Islam were set free. Others were tortured. Eventually ordered to leave the country.

June 1915. Soghomon Tehlirian’s hometown was evacuated. 20,000 people including little children started walking. Into death. Most of them would die of starvation and torture on the way. Or be killed.

The Turkish gendarmes dragged Tehlirian’s sisters off behind bushes and raped them. Next he watched another gendarme split his 22-year-old brother’s head open with an axe. Then the soldiers shot his mother dead before striking the 19-year-old Tehlirian unconscious.

When Tehlirian regained consciousness, he was lying amid a pile of corpses. He saw the mangled body of one of his sisters and the shattered skull of his brother. His other relatives had disappeared.

“In the end both Tehlirian and Talaat reached Germany,” Arjun said, “Tehlirian as a refugee and Talaat as an exile.” When the World War I ended and the Ottoman Empire was brought to its knees, the new regime in Turkey ordered to punish war criminals and Talaat was held responsible for one million deaths. But the demon could not be caught; he escaped to Germany.

“I started the story of Talaat and Tehlirian with a statement about motives making our deeds right or wrong,” said Arjun. “Will you blame Tehlirian for the murder he committed?”

“It’s revenge,” the boy said hesitantly, “and revenge is not good.”

“Well,” Arjun said. “The German court of justice acquitted him.”

“Why are you surprised?”

“But… revenge can’t be a good motive.”

“Was it revenge? Wasn’t it something more than revenge?”

“Something more than revenge?” The boy wondered. “What’s that?”

The boy considered that. That was something new for him: justice as a tweaked form of revenge. He decided to contemplate that later. His concern today was why his father detested the right wing in India.

“The right wingers are descendants of Talaat,” Arjun said. “Check their motives.” A pause and then Arjun said, “Talaat is a demigod for many people in Turkey even today.”

“One man’s god is another’s demon,” Shyam said to himself. 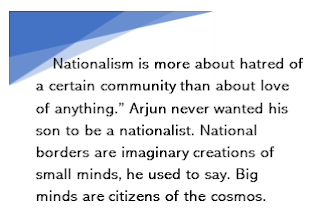 PS. This blog is participating in The Blogchatter’s #MyFriendAlexa campaign.