These days my mornings invariably mock me with the images of Modi and Yogi on the front pages of my newspapers. Gasconade about the progress of Uttar Pradesh under the BJP. Day after day. About women’s safety and children’s health and public hygiene and clean governance and… The Yogi government spent Rs 160.31 crore on television advertisements alone in the financial year of 2020-2021. The print media ads are extra.

Why on earth does the UP government advertise itself in Kerala and that too in local language newspapers? I understand that the same propaganda takes place in other languages too. Gasconade is a language by itself, I know.

The Modi government spends much more, naturally. National level gasconade has to be one up on local levels. In his first term as PM, Modi spent over Rs 5000 crore on gassing. I haven’t managed to get the figures for his second term yet. The graph below will help you to project the figures. 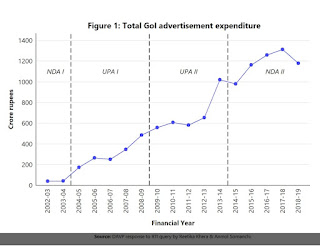 When Donald Trump tweeted a video with a title, ‘Muslim migrant beats up Dutch boy on crutches,’ it was taken up by hundreds of thousands of fans and supporters. The video was real but the perpetrator was neither Muslim nor a migrant. Before the facts were unearthed by sensible people, the harm was done.

Trump was a post-truth leader. America threw him out eventually.

What if all the crores spent on gasconade were used for keeping petroleum prices and cooking gas prices under check? What if the money was spent on building better hospitals and schools and other such necessary establishments or infrastructure? No, in post-truth leadership gasconade plays a gigantic role.

PS. This blog is participating in The Blogchatter’s #MyFriendAlexa campaign.