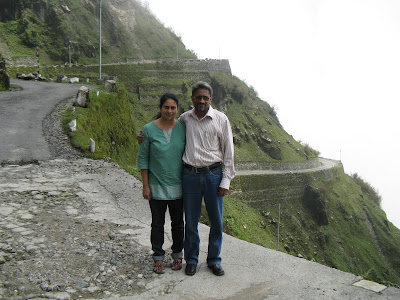 When you have conquered certain heights you can’t descend any more. You spread your wings and fly. Richard Bach said something similar in one of his two famous books. He was speaking metaphorically about the quality of your life, of your thinking, of your attitudes. But when you are on the mountains, that axiomatic saying holds good literally too. When you conquer one peak, the next higher peak beckons you bewitchingly. You want to climb that too. And the next one too. And it goes on. The mountains urge you to go higher and higher.

I spent the most worthwhile period of my life on the mountains of Shillong. Fifteen years. They should have been the happiest years of my life. I loved the mountains. I still do. But Shillong turned out to be the bitterest part of my life. That’s one of the ironies of life. When you’re only conquering peaks, the same ones, ad infinitum, from home to workplace and back, from home to water source and back with buckets of water in both hands, from home out on leisurely walks or rides and back, the peaks lose their charm. Peaks become “quotidian,” to use the favourite word one of my philosopher-friends.

Mountains have protean faces. The mountain that lies opposite your house which is on another mountain has infinite faces. What you see in the morning is not what you see in the evening. Or at any time of the day, in fact. Even the weather in the mountains is terribly unpredictable. Now it rains and now it shines.

Dr S C Biala who was the principal of my school in Delhi for a brief while will vouch for the unpredictability of the weather in the mountains. He was a mountaineer. He has taken many people including me on trekking in the Himalayas. He has written books on trekking in the Garhwal Himalayas. Now as an elderly person he still guides aspiring trekkers via his YouTube channel. His initiative took me along with some students to many places in the Himalayas such as Hemkund and Gomukh, Gangotri and Yamunotri, Badrinath and Kedarnath. Exotic places, thrilling treks. Most importantly, bewitching mountains. The snow-capped peaks ahead of you keep calling you as the sirens called Ulysses from the musical island.

I have descended, however. No, Richard Bach is not wrong. I have descended from the mountains to live my own life. But my thinking still flies on enormous wings. It will continue to fly. I refuse to descend. Thank you, Bach. And thank you, Dr Biala. The mountains of Shillong betrayed me, however. So, they have to wait and earn my gratitude.

Mountains don’t forgive easily. Have you ever realised that? Wait for the next avalanche from Siachen.