Idealistic longings of a comrade 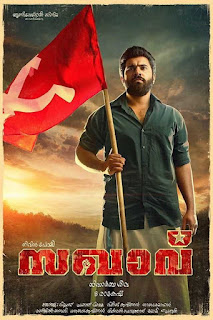 Sakhavu (Comrade) is a recent Malayalam movie which tells the story of two Communists in Kerala, one belonging to the older generation while the other is a product of our very own times.  Krishnakumar is a left wing student leader with political ambitions.  He is selfish, cunning and manipulative – like most of our politicians.  He knows how to get out of people what he wants.  The end justifies the means for him.  And the end is nothing but self-aggrandisement.  Even when he is in a hospital to donate blood (which he was forced to do by his party), he is more interested in getting food and fruit juice from the patient’s people than donating blood.  He has no scruples about pocketing the money of another man whom he meets in the hospital and whom he had helped earlier with his political influence.  He fails to understand that the poor man was keeping the money for the medical needs of a hospitalised relative.

The patient who is supposed to receive Krishnakumar’s blood (the rare O Negative group) is his exact reverse.  Krishnan – who is known as Sakhavu, Comrade – is an idealist who spent all his life for the poor and oppressed people.  He has been a personification of the ideals of Communism.  His idealism earned him many enemies one of whom attacked him which is why he is in hospital now.

Both the roles are played remarkably well by young actor Nivin Pauly.  Krishnakumar learns Comrade Krishnan’s life story while waiting in the hospital and undergoes a personal transformation.  He decides to take on the old idealist’s mantle.

I watched the movie quite by chance because it was one of the Onam fares brought by a TV channel.  I decided to watch it especially because Kerala’s Chief Minister, Pinarayai Vijayan, had watched it when it was released and gave it his applause.  Yes, the movie deserves the applause.  But it left me wondering whether the kind of idealism portrayed in it will ever return to Indian politics.

The cynicism of the student leader in the movie is the only visible reality in contemporary politics.  The movie left me longing for a politician with at least a semblance of idealism.