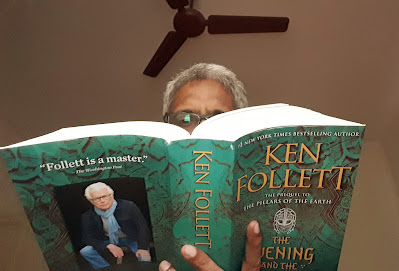 I’m entering the last quarter of Ken Follett’s massive novel, The Evening and the Morning which is set in the cusp of the tenth and eleventh centuries: a whole millennium back. The novel is a prequel to the author’s popular and equally bulky novel, The Pillars of the Earth [which I read 12 years ago with unflagging interest].

Follet can bring alive the medieval period like no one else. We get clear glimpses into the way of life of those times, dark times. The Church and the State together wielded tremendous powers over people and exploited the people ruthlessly. Many of Follett’s novels clearly show the venality that lies at the very core of people in power, whether in politics or in religion.

I have often been repulsed by our contemporary leaders – both in politics and religion – who are absolutely uncouth and subhuman. Beneath the elegant attires they wear, whatever the colours be, they are sheer savages who feed on the carrion of human ignorance, vulnerability, folly, and helplessness. Patriotism and nationalism, gods and scriptures, slogans and shibboleths, are all expedient grist for their self-serving mills.

The Evening and the Morning has Wilf and his brother Wynstan as representatives of these depraved leaders. Wilf is the political power in the novel and Wynstan is a bishop. They are step-brothers too, born of the same father. Of the two, the bishop is more perverted and diabolic. He is a precise mirror image of a present-day Bishop in India who faces many charges of raping nuns, amassing huge sums of black money, and running a mafia of thugs. Bishop Wynstan is a counterfeiter of currency, a lecher, gambler, and a heartless schemer who does not hesitate to usurp his own brother.

Follett always counterbalances his cast with good people too. Ragna, Wilf’s wife, is a noble character. So is Edgar who is just an ordinary, helpless citizen. There is a monk too, Aldred, who shows the redemptive potential of religion.

It is Edgar who raises the question to both Ragna and Aldred, “Why aren’t there more people like you?”

The world would have been the kingdom of heaven if there were more people like Ragna, Aldred, and Edgar. Ragna is a noble political power though very limited by her gender. Aldred is an equally noble religious leader. Edgar is a noble ordinary citizen. They are the reverses of people who actually wield the powers.

Why do perverts and criminals end up in the topmost rungs of the hierarchical ladder, whether in politics or religion? Follett suggests that there is an umbilical connection between power and venality. See what he says about Bishop Wynstan:

Two things gave him joy: money and power. And they were the same really. He loved to have power over people, and money gave him that. He could not imagine ever having more power and money than he wanted. He was a bishop, but he wanted to be archbishop, and when he achieved that he would strive to become the king’s chancellor, perhaps to be king; and even then he would want more power and money.

In the absence of Wilf for a brief while, Ragna takes over the governance and people benefit tremendously. She brings prosperity, justice, and goodness to people. She shows that it is possible to create a happy world, in spite of unavoidable evils like illness and natural calamity. But the Wilfs and the Wynstans won’t let Ragnas survive!

Why can’t people be like you, Ragna? I’m left wondering too.